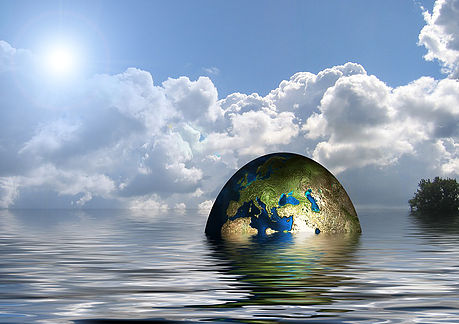 “We look but then we seem to forget. Remember and then forget again. Climate change is like that. We deny because we fear that letting in the full reality of this crisis will change everything. And we are right.”

After spending six years at four different universities and studying with students from all over the world, I have started wondering how this sentence from Naomi Klein applies to Higher Education? How come most academic institutions do not equip students with the knowledge on how to deal with one of the biggest challenges of this century – the ecological transition – recently symbolized by the respect of the 2°C limit? In other words, limiting the rise of temperature in the atmosphere to no more than 2°C compared to the pre-industrial era. What is the place that ecology-related courses have in the university curriculum, especially in Economics?

I am using the term ‘ecological transition’ in this article because it is more holistic as it includes the so-called energy transition but also looks at the consumption of other natural resources such as metals, water, forests, fish, meat… As Prof. Jeffrey Sachs puts it, this transition affects every sector at every level. The basic idea behind it is that everyone will have to do their bit to ensure the low carbon society needed to respect the 2°C limit, which will allow present and future generations to keep their ability to adapt to climate change. The ecological transition joins all the fields of study. Whether you study Science or Social Science (Humanities), you can approach it. This might appear more logical for those studying Science because Climate Change Science or Ecology obviously have much more to do with Chemistry, Physics or Biology than with Sociology or Economics. However, Social Science students could study the impact of the modern economy, based on the consumption of goods and services that heavily rely on energy fuels, on well-being or inclusiveness in society. Those students could also start thinking further about the ethical climate, energy and environmental policies needed to ensure fairness and justice for all. Most importantly, they could also start building bridges with Science and develop not only interdisciplinary studies but also cross-sectoral studies.

Still, the number of courses concerning this topic that are offered by universities remains surprisingly low. Why should we expect people to adopt a responsible attitude towards the challenge of climate change if we do not properly understand its risks and consequences? Why is it that most students usually pay attention to turning off a light as they leave a room or try to use their bike on a daily basis but, for instance, continue to eat meat every (other) day? Is there a real understanding of what consequences our daily actions have? And in what proportions? If not, why do universities have so much difficulty in tackling this issue and encouraging a well informed debate?

This lack of openness to other ideas is especially present when one looks at most courses on Economics given both in Social Science and Science. Most students that have studied Economics at university have followed mainstream orthodox Economics. The latter is characterized by production and consumption, depending on a favourable social dynamic and an efficient allocation of resources. The ultimate objective of orthodox Economics is economic growth, monitored by a single indicator of progress: the GDP. These broad characteristics could be seen as the trunk of a tree that has many branches, representing the nuances between orthodox Economic theories. When reading the newspapers, one can find many adjectives referring to orthodox Economics. While some use terms like neoclassical economics, neoliberal economics, others use broader terms like conventional economics, mainstream economics, the growth theory or even capitalism. The absence of consensus on the terminology did not prevent criticisms towards this model of development solely based on GDP growth. Most students are educated to think that there is only one approach to Economics. More than that, highlighting this issue often brings a similar answer: Universities are supposed to remain politically neutral, as if teaching orthodox Economics is a neutral choice.

Heterodox Economics, proposing other theories to look at the role of the economy, remain difficult to find. They offer a plurality of approaches that have been developed for several decades. Today, they usually share some basic criticisms towards orthodox Economics supporting the ‘business as usual’ trajectory, which is leading the world to a non-respect of the 2°C limit. The latter would cause serious risks and consequences for the environment and the economy, which would undoubtedly have severe social impacts too. These three limitations of orthodox Economics are barely discussed in Economic courses, which seriously encloses the academic debate and reduces the plurality of reflections that students could have. Obviously, like every school of Economic thought, heterodox approaches offer, if not political recommendations, at least an opening of the debate on the validity of the normative approach of orthodox Economics. It is crucial for our societies to develop such reflections as so far an all encompassing theory of the ecological transition does not exist or at least, has not achieved consensus.

The world we live in has quickly evolved from having only a few billion to more than 7 billion inhabitants. Yet, we are still mostly following the same old orthodox authors like Ricardo, Smith, Friedman or Hayek despite our circumstances radically changing. In developed economies, it can no longer be assumed that trading more goods and services will lead to an increase in GDP and to greater well-being. Why not? Because we have gone from a world full of natural reserves, perceived as unlimited, to a world where the use of these reserves is problematic both because they become rare and because they pollute. The theory of ecological economics takes this simple observation into account as its basis, unlike the orthodox authors mentioned above. One has to understand that negative externalities cannot simply be pushed outside the economic sphere as they are its internal problem. Ecological Economics, as much as Green Economics or even more local actions, such as those developed with the downshifting movement (or ‘décroissance’) are all interesting examples of heteredox Economics. On the side of orthodox Economics, the answer to the current situation has been given through the concept of green growth and of ‘decoupling’ between greenhouse gas emissions and economic development. These concepts are supported by environmental Economics, remaining closer to the existent structures of the economy. All these theories represent a debate that has been developed enough to be presented in university courses. They make it clear that it is time to question the priorities of the economies of developed countries.