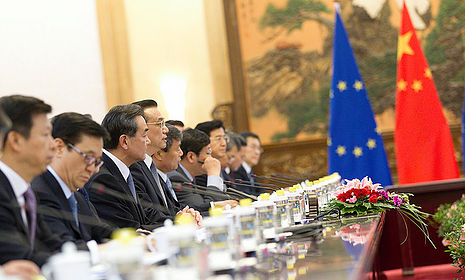 Promoting democracy, rule of law, and human rights is one of the fundamental mandates of the EEAS. By attaching political agendas to its most revered competence- trade- the EU wishes to establish itself as a “foreign policy community” in order to be regarded as more than just a free trade area. Looking back on “5000 years of Chinese history”, the People’s Republic of China is very reluctant to accept any foreign influence in its feat to independently re-establish its glorious position of old, however; especially when that influence comes from the side that caused the historic trauma of national humiliation through the Opium Wars and the Treaty of Nanjing. China’s foreign policy is based on the principle of non- interference in domestic affairs such as democracy, the rule of law, and human rights. This is the fundamental ideological challenge that the EU and China have to overcome in order to conclude the long-overdue new Partnership and Cooperation Agreement (PCA).

The core measure to deal with this issue was the establishment of the EU-China Human Rights Dialogue, which has so far not yielded any significant results. In China, the collective is seen as the extension of the individual, and collective rights safeguard individual rights. The focus of “human rights with Chinese characteristics” is accordingly more directed towards ensuring the right to subsistence and development. Following this logic, only stability and security can guarantee these human rights, and attacking the system of government means threatening security and stability. That may explain why recent arrests in China seem to show a regressive trend. For example, human rights activist Cao Shunli tragically died in March 2014 after being denied medical treatment during her detainment. She had attempted at participating in the UN HRC’s human rights review of China. Also, members of the New Citizen Movement, a consortium of human rights activists, have been arrested for vaguely defined violations and some have been denied access to lawyers.

This shines a pitiful light on the annually held Human Rights Dialogue, which is conducted between comparatively low-level officials of both sides and is regarded by some merely as a tool: for the EU to visibly react to political pressure on the topic, and for China to show openness to dialogue and to make compromises that don’t require major changes. A European participant in the Human Rights Dialogue agrees: “it is just a venue for us to express concern”. What both sides want is to continue their lucrative economic relationship unhindered by issues that are, in effect, subordinate. The EU and its member states have been known to discard nobler intentions in favour of trade issues.

However, despite its shortcomings, the Human Rights Dialogue might still be the right venue to settle some of the issues, to, for example, agree on common definitions or to focus on improving political rights through the rule of law, an area that also clearly requires significant groundwork. The advantage of a shift towards the rule of law would be that it is still connected to human rights issues while also tackling current economic concerns like adherence to WTO law, intellectual property rights, equal competition and market access etc. Thus, an enhanced dialogue on the rule of law and enhanced consultation on justice and especially law enforcement would strengthen the understanding of each other’s legal system, thereby improving business environment. In this way, the element of reciprocity inter pares is accentuated, accommodating the Chinese foreign relations tradition of respect for sovereignty and equality of other countries. To put it in other words: the perception that the EU arrogantly considers itself to have a moral monopoly on all issues of democracy and human rights may thus be pre-empted.

This does not aim at promoting the abandonment of the Human Rights Dialogue- continuous high-level pressure is still necessary, as it is getting increasingly hard for China to keep its inflexible stance. Instead, the proposition is to close the same gap on another level, namely to focus on seemingly basic, but fundamental and realistic goals by finding common ground on political rights and the rule of law.