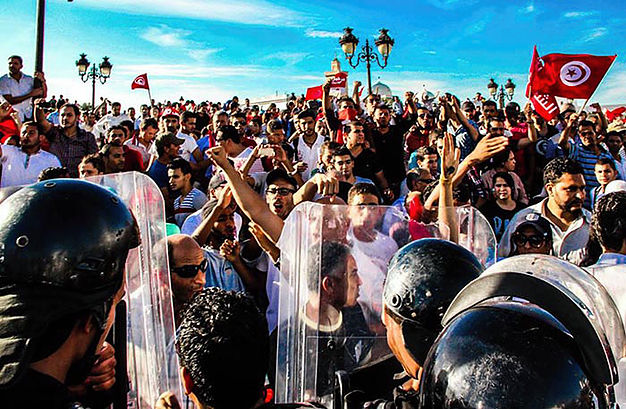 Five years ago, the so-called Arab Spring started in Tunisia when thousands of young people protested against Ben Ali’s regime, demanding democracy and dignity. Later on, this spring of democracy began generating small flowers in Egypt, Yemen, Libya, Syria and Bahrain. Today, the only wilted flower which remains is the Tunisian one.

Tunisia, which has been seen by many observers as the only success story of the Arab Spring, has gone through a long and difficult democratic transition since the fall of the regime of the former president Zine el Abidine Ben Ali on 14 January 2011. This process included the two fairest elections in the history of the country since it gained independence from its French colonizers in 1956.

The first election was organized on 23 October 2011 and created a Constituent Assembly which prepared and adopted the new Tunisian constitution. The second electoral phase took place in 2014 and was divided into legislative and presidential elections. These elections ended the first phase of democratic transition in Tunisia, but have not ended the democracy building process, which will take much more time because of the economic, political and security challenges the country is facing.

On the other side of the field, the other small flowers, which were generated by the Arab Spring and mixed with the hope of young people, have unfortunately disappeared. In Egypt, a sudden political development, which was seen by many observers as a military coup led by General Abdel Fattah el-Sisi, cut off Egypt’s emerging democratic flower after the parliamentary and presidential elections organized in the aftermath of the fall of Mubarak’s regime on 11 February 2011.

As a result of that coup, Egyptian young people celebrated the fifth anniversary of the January 25 Revolution this year under fear and control of Sisi’s regime. A few days before the fifth anniversary, Egyptian military forces were deployed on the Tahrir Square and across Egypt in order to restrict the demonstrations. Ala Khames, a young Egyptian journalist, commented: “Egypt had turned the streets into military barracks a few days before the fifth anniversary of the Revolution.” He explained that Sisi’s regime was using a policy of intimidation in order to avoid any demonstrations.

The case of the neighboring country Libya, on the other hand, is not the same as in Egypt. The Libyan flower of democracy was not picked at national level, but at international level, when Britain and France with US support , acting under the auspices of a controversial UN Security Council Resolution (1973), took matters into their own hands and made the mistake of using military power to remove Gadhafi from power without understanding the complexities of the situation. This military intervention promoted neither democracy nor stability in the country. Libya today is a scene of tribal conflict and terrorism.

The situation in Syria differs slightly from the one in Libya. Muammar Gaddafi was ousted from power and killed, but Bashar Al-Assad still remains in power. Both countries are, however, currently battlefields and full of dangerously conflicting interests. Today, a proxy war between Iran and Saudi Arabia is taking place on Syrian territory. The USA, Turkey, Israel, UK, Russia, France and – behind the scenes – China have their own economic and political interests in Syria because of its strategic location. The common link between the Libyan and the Syrian cases is that the international community has been, at least partially, responsible for the destruction of the dreams of young people. Those young people demanded freedom and democracy. They did not ask for bombs and shells.

Not so far from Syria, young people in Yemen have lost their dream because of Iranian-Saudi interests in the country. “Here a proxy war is also taking place. Iran supports the Houthi rebels, who have seized large areas of the country. By contrast, Saudi Arabia has been leading a campaign of airstrikes against the rebels since March 2015”, according to the young Yemeni activist Osamah Alshami.

In short, the majority of the emerging democratic flowers which were generated by the Arab Spring have been ripped out of the ground. Many young Arabs are nevertheless still looking for them. They are still looking for their dreams, standing up for democracy. From Tunisia over Egypt to Yemen many young people still believe that the Spring has not finished yet!

Ghazi Mabrouk is a Tunisian journalist working in the Middle East and North Africa and currently studying at the College of Europe in Natolin.