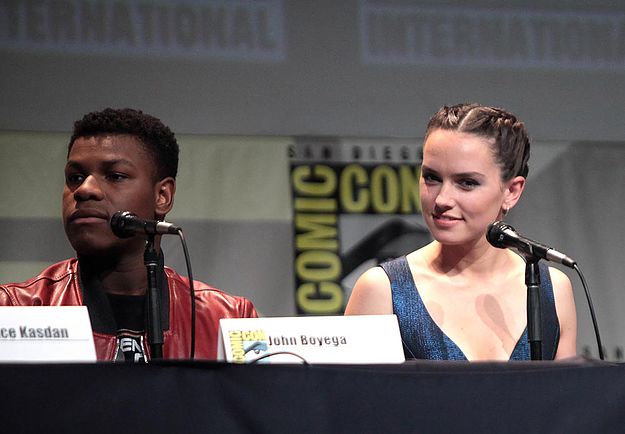 Star Wars: The Force Awakens has been praised repeatedly as a feminist breakthrough. The two new protagonists from London, Daisy Ridley (who plays Rey) and John Boyega (who plays Finn), are the two characters to have most updated the franchise towards modern expectations of gender and racial equality. But, where the sequel succeeds on the racial front it stumbles in its feminism. Finn’s blackness, in a galaxy filled with all manner of unusual non-humans, is rightly never raised other than indirectly through an explanation of why, as a stormtrooper, he is not another clone. Although there is an awkward scene where the only other non-white humans in the film, some Asian men on Han Solo’s ship, are unnecessarily made to speak a non-English language in a galaxy across which all kinds of beings seem fluent. Rey, on the other hand, has her femininity turned into a focal point, most markedly when she has to awkwardly tell Finn that she can fend for herself and so to stop holding her hand before a predictable role reversal as she extends her hand to an endangered Finn. Another similar scene occurs further into the film when Rey oddly snubs Han Solo’s offer of a gun saying “I think I can handle myself” just so Han could respond the obvious: “I know, that’s why I’m giving it to you”.

Of course, being based a long time ago in a galaxy far, far away, contemporary politics and life on earth more generally do not feature in Star Wars other than through the practical medium of English and the inclusion of humanoid characters we can relate to. Yet, inevitably, we do transpose the earthly mood of our times onto the Star Wars galaxy, through the predominance of white actors, for example, or through the very use of English. But being based in a different time and place, Star Wars theoretically has the capacity to provide a progressive platform to represent racial and gender equality without the full baggage of earth’s history. In this sense, Finn fulfills a useful function simply through the inclusion of a black protagonist whose race is taken for granted. But on the whole, the franchise has never utilized this platform aggressively, never having gotten past meekly reflecting contemporary biases. And so Rey’s character is little more than a reflection of unresolved contemporary feminist struggles. The fact that her femininity is left as something to struggle against and overcome must either serve as an admission of traditional gender roles being natural, or as an indication of how incompletely contemporary gender issues have been resolved.

In mainstream contemporary Western society there is no longer any room for questioning whether racial differences provide a basis for natural discrepancies in individuals’ character or abilities, and so this was transposed neatly onto Finn’s character. Whereas there is indeed still an awkward and undefined struggle between the rights of women to pursue whatever opportunities that are available to men and any natural tendency that might not make equality of outcomes always neatly occur across the population. Thus this unresolved struggle is transmuted onto the Star Wars galaxy through Rey. By drawing explicit attention to her femininity as something to overcome, The Force Awakens further entrenches the gender divide. A truly progressive step would have been to transcend the current earthly impasse by treating Rey’s femininity in the same manner as Finn’s race –that is, by making it irrelevant–, but instead the franchise cynically chose to reflect the mood of the times in order to minimize controversy and maximize revenues, and in the process helped to entrench binary gender perceptions. The alleged progress made between the originals and the latest episode reflect the leaps forward that Western society has taken in the intervening decades, nothing more, nothing less.

The latest episode of the Star Wars franchise is, then, no breakthrough for feminism. In fact, it has been quite the reverse of a progressive step forwards, making no efforts to overcome or move on from our social status quo, thereby helping to entrench contemporary deadlocks rather than break past them. But, beyond this, any gripes –such as harking cheesily back to the originals perhaps a little too often– are relatively minor, and the film has indeed done much to rehabilitate the franchise from the depths it reached in the prequels, when George Lucas was at the height of his powers. Star Wars: The Force Awakens is a film that plays it safe, and as such –being based on such a popular franchise– it is very good, but it should not be mistaken for progressivism.