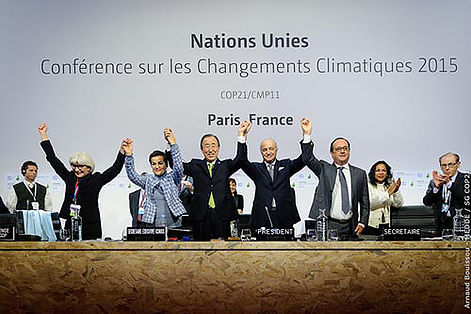 The 12th December 2015 is now regarded as a day that our planet will never forget. On that day, the “historic” Paris Agreement, as the United Framework Convention on Climate Change (UNFCCC) defined it, was reached: the first universal and legally binding agreement on climate change, adopted by 195 countries. It is an inevitably ambitious agreement, whose main goal is expressed by its article 2: “Holding the increase in the global average temperature to well below 2°C above pre-industrial levels”.

But of course, such an ambitious objective comes at a high cost. The urgency of immediate action is evident, since it has been argued that the costs of delaying climate action would be much higher than the costs of implementing mitigation policies now. Indeed, delaying climate action would reduce costs in the short run – and would thus not cause a decrease in popularity of governments in power. However, it will further increase CO2 concentrations, thus making a future mitigation policy much more stringent, and consequently much more costly.
According to the estimates of the International Energy Agency, “the full implementation of climate pledges will require the energy sector to invest $13.5 trillion in energy efficiency and low-carbon technologies from 2015 to 2030, representing almost 40% of total energy sector investment”.

Several climate funding announcements have already been pledged by developed country governments, multilateral development banks and multilateral climate funds. Just to name a few, the European Commission announced its intention to more than double climate finance grants from the EU budget up to 2020, reaching €2 billion per year on average, while the United States announced it will double its grant-based investment in support of vulnerable countries to more than $800 million annually by 2020.
In this regard, according to the Paris Agreement, financial assistance will be provided to developing countries in order to help them adapt to climate change and move towards clean energy. The agreed amount, even if it was only added to the non-legally binding part of the agreement, is $100 billion per year by 2020, to be revised and progressively increased by 2025.
And so to the issue of whether it is really worth investing these unprecedentedly large sums of money to fight the phenomenon of global warming. And definitely it is. The context of the adoption of the Paris Agreement dramatically changed with respect to the context of 1997, when the Kyoto Protocol was adopted. At that time, when the existence of climate change started to become evident after a report published in 1990 by the IPCC, there was little consensus on the fact that the cause of climate change is to be found in human activities. Nowadays, there is 97% agreement within the scientific community that climate change is a human-induced phenomenon. Therefore, in order to reduce greenhouse gas emissions there is urgency for governmental action to offer incentives for the production of clean energy and at the same time to decrease incentives for the exploitation of fossil fuels by making emissions more expensive. However, this on its own will not be enough – a shared effort by civil society and investors is required as well.

In conclusion, the success of the Paris Agreement will depend on the interests states will take into consideration. On the one hand, it will be a success if governments adopt an environmentally-based environmental policy, that is to say a policy genuinely directed to the preservation and protection of the environment where we and the future generation will live. On the other hand, it will be a failure if governments keep on adopting environmental policies driven by economic and industrial interests. This was indeed the case in 1997 in the US, when the Kyoto Protocol was not ratified, mainly because of the high economic costs it would have implied. Then the chief fear was of a decrease in competitiveness of American industries vis-à-vis competitors from countries without emission limitation or reduction commitments, in particular China and India. But this agreement is different: this time China and India as well are ready to fulfil their commitment to curb emissions, and this time there is no Plan B. Whether the 12th December 2015 will be a day that our planet will never forget does not depend on the signatures put on the Agreement in Paris; it will rather depend on what will come next, and on the extent to which the “historic” Paris Agreement will be respected and its provisions implemented by all its 195 signatories.