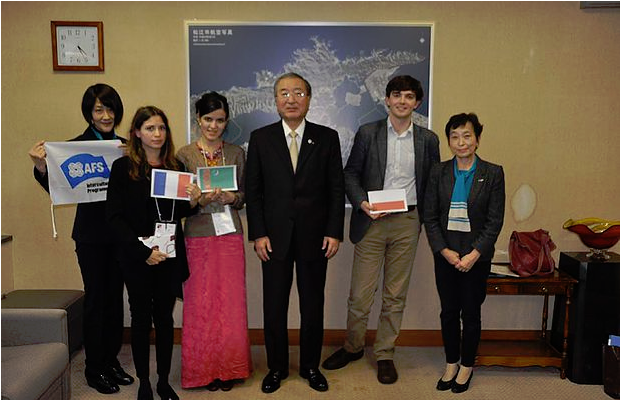 For eight days in December, 10 students from the College of Europe (of which 3 from Natolin) were able to sample Japan as part of an initiative by the Ministry of Foreign Affairs called the MIRAI programme, which welcomed around 150 students from all across Europe and Central Asia.
The trip to Japan was really a once in a lifetime opportunity. My interest in Japan was largely a historical one. I studied History as an undergraduate and when I wasn’t obsessed with the history of Modern Europe, I was following a course on the Meiji Restoration in Japan which completely captivated my interest in the country. My academic dream is to be able to tie the two together and to write a comparative history of the treatment of Europe and East Asia after the Second World War. Coming to the College turned out surprisingly to be a first opportunity to bring together my interests in each region. It has proven a great opportunity to study European History more, but also to indulge my passion for all things Japan. The MIRAI programme allowed us to tailor our visit to some extent along the lines of either Politics, Economics, or Culture. I opted for culture, and I was not to be disappointed!
The programme was jammed full of activities for us while we were there and it would be fair to say that there was not a dull moment. There was plenty of culture to take in, whether through visiting the Edo-Tokyo Museum, the Meiji Shrine, or hearing a talk about the development of Manga in Japan. The latter of these led to an interesting, and somewhat discomfiting conversation, about the current state of Japanese politics. The speaker was a speech writer for current Prime Minister Shinzo Abe and unsurprisingly adopted a line very supportive of the remilitarisation of Japan!
On that note, we also heard talks at Keio University on the Cold War history of East Asia, and learned a bit about economic development and convergence in those countries. This semester I am taking a course here at Natolin on Comparative Regional Integration and the experience of ASEAN and the broader region in which it sits, and so hearing snippets from a Japanese perspective has helped develop my understanding. We also heard from the Jean Monnet Chair in Tokyo, showing that interest in Europe really does span the globe!
However, the highlight of the trip by far were the three days in the middle where we stayed with host families, the 150 of us scattered across the length and breadth of Japan, from tropical Kyushu to snowy Hokkaido. I was sent, along with two others, to the beautiful Shimane prefecture and the town of Matsue. While others took Shinkanzen to their towns, we flew over the mountains and skimmed over the surface of the crystal clear lake at Izumo, adjacent to the runway. We were very close to the Sea of Japan and in Shimane we could really feel nature around us whether driving along the coast, or around lakes, walking in the foothills, or seeing huge mountains penetrating the horizon. It was a beautiful landscape and one I really hope to revisit soon.
Staying with the host families was a really interesting experience. The Japanese home is structured different from the European with different conceptions of ‘inside’ and ‘outside’ and multiple pairs of slippers to wear (or not wear) depending on where in the house you are. It was amazing just how quick and easy it is to adapt to new ways of doing things and I have to say I left Matsue feeling healthier and happier! The host family themselves were really friendly, we pushed through in English, though next time I will hopefully know some Japanese!
While there, we went on even more visits than when we were in Tokyo and we covered everything from Matsue’s famous castle, to the silver mines at Iwami Ginzan, history museums, art museums, a sake brewery, as well as meetings with the Mayor of Matsue and the Governor of the Prefecture who are working on making the region more well-known among tourists. They’ve definitely got one recommendation from me!
Despite all of the fun had in Japan, and all the new things learned, it was the friends made and people met that made the trip special. I will not forget the warm welcome given by everyone in Tokyo and Matsue and in both towns I think I have made friends that I will not soon forget. It is hard to sum up the amazing opportunities that came with this programme and there are so many things that could not fit in the space of one article. The trip has left me with a renewed enthusiasm for Japan which has led to me even self-teaching the language. The people met were amazing, beautiful, and inspiring, and all that can be said is a big thank you to the College for making this trip available to me, and to the MIRAI organisers for pulling such an amazing programme together!
Share on Facebook Share
Share on TwitterTweet
Share on Pinterest Share
Share on LinkedIn Share
Share on Digg Share
Send email Mail
Print Print