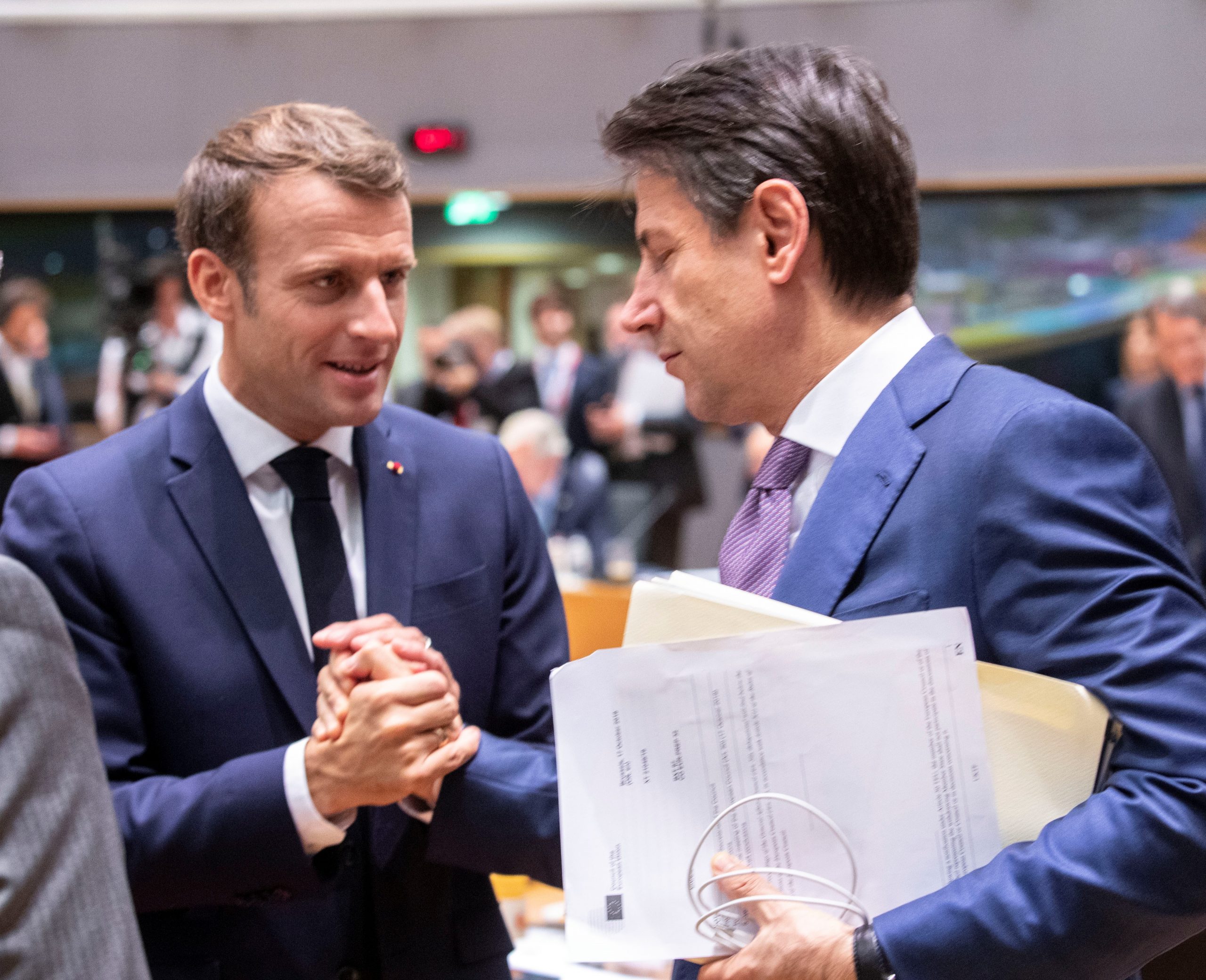 February 2019. The French ambassador in Rome, Christian Masset, returned to the Farnese Palace after being called back to Paris for several weeks. This unprecedented event marked the culmination of a diplomatic crisis that had been simmering for several months. In the background is the complex relationship between the two counties and the durability of some structural features of Franco-Italian relations rooted in a long history. When Italy criticizes France for what it calls “arrogance”, France suspects Italy of treacherous manoeuvres. Both countries should palliate the lack of “positive othering”. These diplomatic tensions are further coupled with a long-lasting sentimental crisis which is tinged with admiration, jealousy, resentment and frustration. Now is the time to overcome these obstacles and acknowledge the fact that the Italy–France duo has a huge positive potential. Can the Corona crisis provide the required momentum for such a breakthrough?

The bilateral relationship between France and Italy has always been a close one, often turbulent but in the end always friendly. If the latter defines the French people as their “cugini d’oltralpe” (literally, the “cousins from behind de Alpes”), for the citizens of the former, Italians are, as Jean Cocteau once said, “les Français de bonne humeur”[1]. Both countries have seemingly always entertained a relationship that swings between love and hate. However, it is the path of collaboration that should be privileged in order to have an optimum trade-off for both.

Between crises, long periods of friendly and cooperative relations have ensued. In the 20th century, particularly after the Second World War, a significant number of Italians immigrated to France. The post-war period was characterised by a steady increase in economic exchange between France and Italy.

In 1945, from April to June, tensions broke out between the new anti-fascist government and French General Charles de Gaulle, who wanted to re-integrate the Aosta Valley as a means of reparation of the Italian “coup du poignard” during the war. The intervention of US President Harry Truman was necessary to put an end to the dispute and French troops were withdrawn. In the 1960s, there was again friction between de Gaulle’s concept of a “Europe of Nations” and the federalist objectives of Christian Democrat governments. Other misunderstandings with the French authorities later emerged during the governments of Silvio Berlusconi. In 1995, Italy voted at the UN for a motion condemning the resumption of nuclear testing by President Jacques Chirac. In retaliation, Chirac cancelled the Franco-Italian summit, the first time since 1983, the year of the establishment of the format of this bilateral meeting. However, quite quickly, each of these controversies were set aside.

The height of the new tensions took place during the electoral sequence of 2018 and 2019, which began with Italian politics and ended with the European Parliament elections. In the context of electoral competition, crossed invectives were the plot of this bilateral relationship: some Italian political forces depicted French President Emmanuel Macron and France as negative examples, while at the same time, Macron designated the leader of the League, Matteo Salvini, as a political enemy. It thus seemed that relative mutual respect in the international sphere was shelved.

It began during Easter 2018, when the Italian foreign ministry summoned the French ambassador, Christian Masset, for a dispute over the presence of French customs officers in Bardonecchia, as part of a relationship regulated by different agreements: the Chambery Agreement of 1997, the Prüm Treaty of 2005 and the Agreement between Italy and France on bilateral cooperation in the execution of joint police operations of 2012. From then on, the saga of governmental fights continued.

The beginning of 2019 saw a succession of troubling events concerning the two countries. Criticism of the French monetary policy in Africa (franc CFA) and the meeting between Luigi di Maio, the vice president of the Italian Chamber of Deputies at that time, and a group of “gilets jaunes” yellow vests, represented further episodes perceived with extreme irritation in Paris. It was in this context that France summoned Teresa Castaldo, the Italian ambassador, and then recalled Masset. The latter was an extreme diplomatic gesture, which had not been seen since Italy entered the war against France in 1940. The tension was so strong that the project of the Treaty of Quirinale had been set apart from the political agenda in 2018 or 2019.

The return of the French Ambassador to Rome was possible thanks to the involvement of Sergio Mattarella, Italy’s president. The balance needle embodied by Mattarella in this major crisis demonstrated that even staying in the framework of his constitutional power, he is still playing a pivotal role in the Italian view of European relations. Moreover, with the second government formed by Giuseppe Conte and thus the banishing of simplistic and narrowed positions on social media, an increase of peaceful and stable relations has returned.

The French-Italian couple for a multipolar EU

Beyond a sentimental celebration of the Franco-Italian relations, the Summit in Naples (February 2020) constituted in many ways a fresh start on enhanced cooperation between the two “cousins”. While it triggered a reinforcement of a bilateral mechanism of mutual benefit, it also established the institutionalisation of relations that might become complementary to the Franco-German one in EU matters. It brings to the fore some key European cooperation sectors, notably in the economic and security fields.

The Franco-German couple has held until today an irreplaceable pivotal role for the EU mainly due to its geographic, economic and demographic weight. Discrepancies between Germany and France are commonly seen as the cement of the great European compromises, as Germany tends to represent Northern, Central and Eastern European countries in the European arena, while France usually reflects Mediterranean countries, including Italy. In this context, the Franco-Italian relationship has been historically used at the EU level as an essential part of the Franco-German engine, as France would have trouble to balance Germany without Italy.

However, the Franco-German relationship appears to be currently going through a crisis of confidence. At the same time, the EU is facing growing fractures triggered by Brexit, an East-West disagreement over the migration management, a North-South division inherited by the long-lasting effects of the euro crisis, and a rivalry over geopolitical priorities in its two neighbourhoods. This increasingly multipolar EU constitutes a unique window of opportunity for the Franco-Italian axis, which notably presents two neglected economic and geopolitical potentials.

Firstly, greater coordination between France and Italy would be desirable in the area of economic and financial integration of the EU. It is noteworthy to recall that in the process of the economic and monetary union, Southern European countries have always been significant for the French trade balance and served as a counterbalance to German influence. While France is concerned with maintaining this geo-economic balance, Italy historically addresses economic integration positively, as a factor of modernisation. This overall trend is even more true today as Italy is a crucial ally for Macron’s European ambitions. These two founding members of the EU are indeed committed together in strengthening the Eurozone, notably through a genuine budget, the creation of a European unemployment insurance and further developments of the European Stability Mechanism. In this perspective, Macron’s strategy of building a “Europe of solidarity” is strongly supported by Southern European countries more affected by the effects of the last economic crisis, foremost among them Italy. Yet, instead of turning to its alpine neighbour who backed his European views, Macron initially turned to Germany as a natural ally for large-scale European projects. In the face of Berlin’s obvious reluctance, it is clear that Paris will have to position itself differently. In order to continue to promote this change in the European economic model and better adapt it to the economies of the Mediterranean countries, bringing the French-Italian relationship back to the forefront will be crucial.

Secondly, at the geopolitical level, France and Italy are two Southern European countries that are projecting themselves into the Mediterranean. Thus, they are in tune to stress the absolute priority of achieving long-term stability of the EU’s Southern neighbourhood whereas successive enlargements seem to have shifted the EU’s centre of gravity to the North and to the East. Yet, the Southern neighbourhood’s evolution into a “ring of fire” of widespread instabilities made it urgent to re-launch the Southern strand of the European Neighbourhood Policy. It indeed became one of the main strategic threats for the EU from which derive many current challenges such as promoting an orderly migration management and combating terrorism. At the forefront of these issues, both Italy and France can provide their shared expertise on security issues in the region which can further become a test-case for developing a genuine common European strategic culture.

Finally, the Libyan case is surprisingly another area of bilateral cooperation from which the EU could ultimately benefit. After years of strong disagreements since the campaign to remove Mummar Gaddafi in 2011, the two European powers have claimed in Naples their willingness to act in concert to resolve the crisis in the spirit of the Berlin Conference – through a peaceful solution under the aegis of the UN, respecting Libya’s sovereignty and territorial integrity. It is still too soon to say if this will constitute a tangible merging point, but it definitely calls on the EU to position itself convincingly on a strategic case in which Russia and Turkey are now taking the upper hand.

In light of the COVID-19 epidemic that is drastically affecting Italy and the European Union as a whole, this is really the time to overcome all the harsh moments and see in the “other” the richness that it might represent for oneself. “France is alongside Italy; Europe must not be ‘selfish’” Macron stated during an interview for Italian newspapers, thus aligning Paris on the same position as Rome concerning the so-called “Corona bonds”, a common debt shared between all Member States. In the EU arena this joint position has been reflected by the common proposal addressed to Ursula von der Leyen by commissioners Thierry Breton (internal market) and Paolo Gentiloni (Economy) who called for a fund to issue such bonds. Yet, it did not receive the support it deserves.

It seems evident that now, more than ever, Europe should play the card of solidarity and the so-called Coronabonds must not be a pretext for breaking off the dialogue with the Northern countries. However, due to the necessity to react rapidly, it is time more than ever to set aside the burden of individualism.

In this historical context, Hannah Arendt’s notion of “crisis” resonates stronger than ever. The crisis brings out an element of unexpected novelty: race riots, a strike, but also something more comprehensive, sweet like a birth or a “love encounter”. We want to believe that for France this love encounter will be Italy, and vice versa. Like a new birth.

[1] According to Jean Giorno: “Italians are French with a good mood”