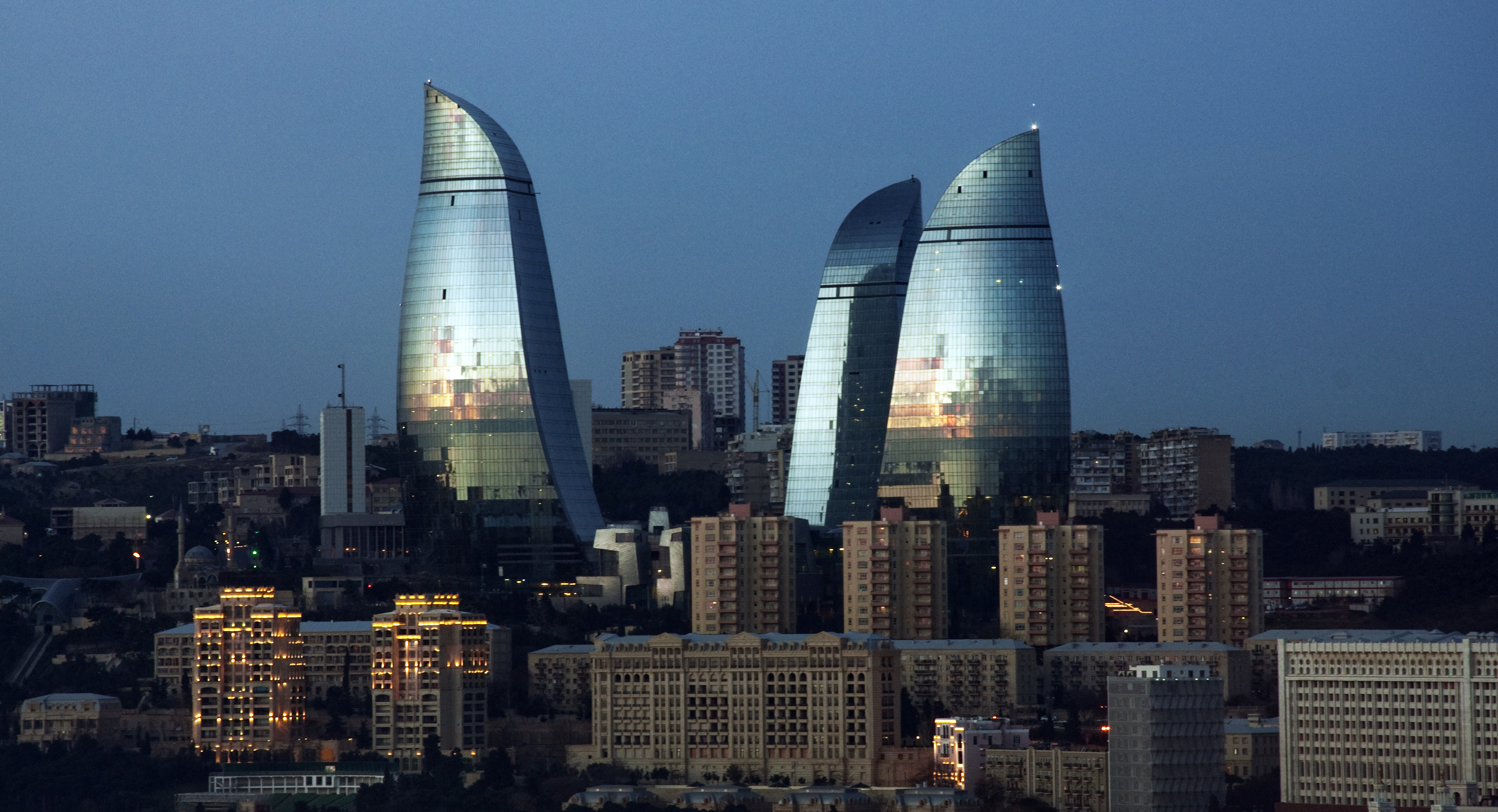 Walking uphill from the Heydar Aliyev enbankment, along the Koura river, we were strolling the grounds of Tbilisi’s Saburtalo district. After passing shiny modern buildings under construction, we arrived early on Almasiani street, a dusty lane squeezed in between two huge concrete Soviet habitation blocks. We were going to meet exiled members of Azerbaijan’s shrinking civil society.

Once there, I go to the nearby store looking for something to nibble and come back holding a churchkhela, Georgia’s national candy, a sort of sausage made of fried grape juice. I share it with our small group. Our professor, biting his cigarette, declines the offer.

Our contact, Lala Aliyeva, arrives a few minutes late. She is a journalist, working for Chai Khana,[1] a new media online platform tackling a variety of subjects related to life in the South Caucasus in five languages (English, Russian, Azerbaijani, Georgian and Armenian). Lala takes us to one of the building blocks, into the offices of the Caucasus Civil Initiatives Center,[2] a local NGO, where we meet Zohrab Ismayil. Back in Azerbaijan, he was the chairman of the Public Association for Assistance to Free Economy (PAAFE), a Baku-based NGO focusing on transparency, government accountability, economic freedom and respect for property rights.

In the years 2013 to 2015, following the Maidan Revolution in Ukraine and the shady reelection of Azeri president Ilham Aliyev[3] (son of previous president Heydar Aliyev[4]), for a third term, the Azerbaijani government, already one of the most restrictive dictatorships of the European continent, introduced a series of new laws and regulations affecting NGOs, their funding, and their activities. This allowed for an unprecendented crackdown on the NGO sector between 2014 and 2016.[5]

Zohrab was summoned twice to the Prosecutor General’s Office to be interrogated. His NGO’s bank accounts were seized after a closed court hearing, and his own assets were frozen. And Zohrab’s case was far from isolated: journalists and media outlets (Radio Free Europe/Radio Liberty for example), human rights advocates, and political activists were pressured or prosecuted, forced into exile, or, on the contrary, forbidden to leave the country. NGOs, including international ones such as Oxfam, or the Open Society Foundation, as well as tens of local Azerbaijani NGOs faced prosecution, had their accounts seized and their offices closed. Most of the prominent figures of Azerbaijan’s civil society ended up behind bars or in exile. If some like journalist Khadija Ismayilova, human rights lawyer Intigam Aliyev[6], or human rights activists Anar Mammadli[7] and Rasul Jafarov[8] have been released, their criminal records remain, and in the case of Intigam Aliyev, his travel ban as well. To this day, there are still around a hundred political prisoners in Azerbaijan.[9]

Zohrab has been in exile since August 2014. He worked as a fellow at Michigan State University for a year before joining other Azeri activists in Tbilisi, such as Amin, a young lawyer, also a member of the Caucasus Civil Initiatives Center. There, they conduct and publish research, organise regional projects and training for young activists, advocate for transparency and extract information – from the Panama Papers for example.

Azerbaijan can be described as a captured state, a concept fathered by the IMF to describe a form of grand corruption. State capture means the entire decision-making process and state apparatus is only used to serve the private interests and the enrichment of a small cast of oligarchs.[10] And Azerbaijan is Europe’s most captured state. Its fragile economy rests solely atop its oil reserves. The oil rent, however, does not benefit anyone but the Aliyev clan, their minions, and its vanity architectural works in Baku, part-Dubai-style-pet-projects, part-money-laundering-schemes.[11] Most of the oil rent isn’t shared, and serves no other purpose than stabilising the Azerbaijani currency, the manat, which was devaluated by 97% in 2015.[12] Nothing has been achieved to properly solve the socio-economic crises following the decline of oil prices, no tangible economic progress as been seen on the ground – Azerbaijan entered recession in 2016. The average monthly salary is 515 AZN (or 270 €), a lower number than both of its South Caucasus neighbours’ – Georgia and Armenia. “Oil corrupts, it corrupted political systems everywhere. Azerbaijan isn’t different.” Zohrab tells us. “If we get rid of oil, we can rebuild a state. Azerbaijan is not a state, it is a mafia.”

With the socio-economic situation worsening, repression strengthens to defend a fragile stability. But with a silenced opposition, and an entire state apparatus de facto answering to the Aliyev clan, the Azeris have slowly lost the will to openly oppose their government. Half of them work, in one way or another, for the government – in the Army, in the oil sector… In every family, at least one member is a state employee. They will face repercussions, be forced to resign, have their advancement blocked or be fired if one of their relatives is whispered to be a member of the opposition. There are not many opportunities, or space in the media for the opposition to exist, nor is there any money. Nevertheless, the opposition is there, but almost in worse shape than under the Soviet Union, when it could only exist underground. Join it today and you’ll get your manager reporting on you, your university sanctioning you and your mother losing her job. There isn’t much to join anyway. Too few opposition parties, too weak to properly oppose the government, no free unions… The Azerbaijani state has successfully created cynical citizens, willing to protest, but unable to do it, repressed by social pressure and fear. “We have lost, as a nation, the will to gather together.” explains Amin.

And when protest is in the air, the Aliyev regime has got a secret weapon up their sleeve: Nagorno-Karabakh – the neverending “frozen conflict” with Armenia over the disputed separatist region.[13] No one quite benefits from the Karabakh conflict like the Aliyev family. Not only does it give them legitimacy as defendors of Azerbaijan, but it also chokes the entire public political debate. When in April 2016,[14] after several years of socio-economic crises and growing critiques of the government, the Azerbaijani armed forces launched an offensive over Armenian positions in the mountainous region, the opposition mainly fell in line and unanimously supported the troops. No prominent opposition force (or potential opposition force) in the country thinks Azerbaijan should give up Karabakh. As Zohrab puts it: “Many Azeri believe that if Azerbaijan has a strong economic development, a strong democracy, a strong army and real power, it will be useful for the resolution of the Nagorno-Karabakh conflict.” Even when it comes to economic development, it remains a means to an end – getting Karabakh back.

The picture wasn’t always that grim. Azerbaijan has already been a democracy in the past. When it declared its first independence from the Russian Empire in 1917, it was the first democratic republic in the Turkic world, and the first Muslim-majority country to grant women equal political rights to men, and one of the first countries ever to allow them to vote, in 1918.[15] It had a free and diverse press, including a famous progressive satirical journal, Mollah Nasreddin.[16] At the fall of the Soviet Union, Azerbaijani civil society was strong and active. When Heydar Aliyev took power in the 1990s, he was opposed by huge political organisations and “republican” movements. Azeris are proud of that heritage, and they suspect that European Institutions do not pressure the Azerbaijani state the way they do Belarus because they are afraid it will turn into an Islamic republic without Aliyev in power.  Amin and Zohrab keep on emphasising that Azerbaijani society and the opposition are deeply secular and there is no will to see the rise of a religious party.

They both have hope. The opposition who challenged Heydar has survived. Even if the still underdeveloped civil society sector has been crushed, it has survived. The state cannot reach them everywhere, particularly in Azerbaijan rural areas, where the state is less present there is room for them to act. They have observed Ukraine and Georgia, and learned from their successes and mistakes. The next time Ilham’s power is shaken they will be ready to act, they assure us. “Political rights are okay, but when you work 60 hours a week, you don’t need values. We should focus more on economic and social rights than political rights.” Zohrab says. A lesson that seemed directed at the European Union.

When talking about LGBT and gender issues, among the many other  issues[17] tackled by Chai Khana, Zohrab deems them “not a priority” but is cut by Lala, who adds “For now.” As we all try to repress a smile, seeing him apologise to the young woman, he concludes “It will come. First we need to address torture and freedom of assembly, then that.”

[5] See the report by Zohrab Ismayil and Ramute Remezaite, Shrinking Space for Civil Society in Azerbaijan, June 2016. Available at: http://www.caucasusinitiative.org/researchs/2/shrinking-space-for-civil-society-in-azerbaijan

[10] Joel Hellman and Daniel Kaufmann, “Confronting the Challenge of State Capture in Transition Economies”, in: Finance & Development, vol.38, no.3, September 2001. Available at: http://www.imf.org/external/pubs/ft/fandd/2001/09/hellman.htm

[11] Perhaps the most (in)famous of example of this practices : Trump Tower Baku. http://www.newyorker.com/magazine/2017/03/13/donald-trumps-worst-deal

[17] Chai Khana (or “The Tea House”, with a pun that reflects its commitment to female empowerment) also focus on a wide range of cultural and political subjects, such as conflicts, IDPs, minority issues, resorting to various media (film, photography…)