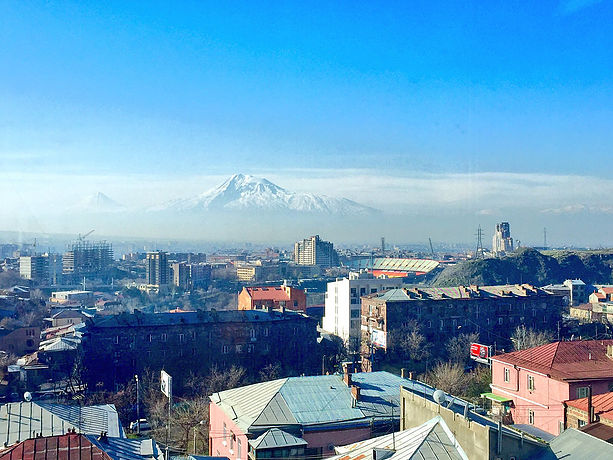 History deeply influences the reactions to the current geopolitical conflicts in Armenia and Georgia. Both countries oscillate from the East to the West, from NATO’s protection to Russian support, in their struggle for survival. Pro-western Georgia sees Russian sympathies rising  while pro-Russian Armenia is apprently tempted by the “Swiss model” of neutrality. On a recent study trip to both countries, Natolin students learned firsthand of the issues these countries are facing.

“Have you ever watched the Ararat Mountain from Yerevan during the night? You will see the line of lights blinking. Those are the NATO bases, those are the lights of the Western allies of our enemy”. Jenny Paturyan is a young Professor and researcher at the American University of Armenia; she explained to us that the last century’s history is essential in explaining the proximity between Armenia and Putin’s Russia. Mount Ararat is the holy Biblical Mountain from which Christian Armenians draw the story of their origins from Noah’s Ark. And it is now situated in Turkey’s territory. And Turkey was responsible for the 1915 Armenian genocide which Ankara does not recognize. “Russia is the place that saved Armenians in the beginning of the 20th century –adds Jenny– Western countries are friends with Turkey. How can you expect us to be on your side?”.

We were told more about the current geopolitical framework of the Caucasus by Richard Giragosian, the founding director of the Regional Studies Center: “Georgia is closer to the European Union and aspiring to become a NATO member; Armenia is in danger of becoming a Russian protectorate”. How has Brussels’ attitude to the region evolved?  “The map of the Eastern Partnership has changed. Azerbaijan is not interested anymore in the agreement. Georgia faces challenges and constraints because of its domestic drop-backs. After joining the Eurasian Union, Armenia is now negotiating a new legal framework in its relations with the EU. Therefore, Armenia is in the unique position to salvage and relaunch the Eastern Partnership”.

Declining Western influence
Post-Saskashvili Georgia has ratified the Association Agreement and is now part of a Deep and Comprehensive Free Trade Area (DCFTA) with the EU. Nevertheless, observers and academics have begun to doubt Georgia’s loyalty towards the EU and criticise Gazprom’salledged shareholder Bidzina Ivanishvili’s informal rule in the Country. “Formally, he doesn’t occupy any institutional role – explains Giorgi Meldaze, director of the Center for Constitutional Research at Ilia State University in Tbilisi – but in fact he is the number one of the government”. Members of the ruling coalition in the Parliament multiply pro-Russian declarations, while the European dream becomes less and less attractive. “After the Soviet collapse Western Europe was the engine of a huge euphoria on spreading democracy and liberal values”, says Helen Khostaria, Chairperson of the Board of Georgia’s Reforms Associates (GRASS). “With all the international conflicts and the challenges that we face now, European resources for spreading democracy have become more scarce”. What strategy can be adopted? “Within the ENP, a new stick-and-carrot policy is needed. People should see the benefits of European integration on the ground, and at the same time governments should feel the pressure for their performances”.

Meanwhile Armenia looks up to the ‘Swiss Model’. “I believe it is useless to bet on being part of an empire –says Jenny Paturyan– We have to take little steps in both Russian and European directions, and try to keep balancing. And we shouldn’t forget that also Iran and the United States are geopolitical key players in the Caucasus”.  Richard Giragosian partly disagrees: “Armenia is stuck in a geopolitical arena where Iran, Russia and Turkey fight for greater influence; we cannot behave as neutrally as Switzerland. But we can keep a balance between Russian support for security and the West, [and sustain] our relations with the Armenian diaspora and […] EU investments and engagements. What we don’t know, is if Armenia will be able to survive”.

Increasing Russian influence?
History is not the only factor that influences the current situation of both Georgia and Armenia, there are other elements that are decisive to understand the paths that they have followed over the past decade. While Georgia enjoys total energy independence from Russia –it receives gas from Azerbaijan in a quantity which is superior to its needs– Armenia is  fully dependent on the Russian energy supply, since its borders with Turkey and Azerbaijan are completely closed and their relations shut down due to the Nagorno-Karabakh conflict. While Russian propaganda in bilingual Armenia plays a vital role, it is less easy to justify in Georgia. For David Bakradze, Minister for Euro-Atlantic relations in Georgia, “although Russia has occupied two Georgian regions, we have chosen to lessen the hostilities and irritating rhetoric towards each other, and to concentrate on trade, cultural and humanitarian relations. But we are not translating the pragmatic needs of the Georgian population into a political sympathy for the Russian Federation”.

What way forward for the EU?
The escalation of the Nagorno Karabakh’s conflict on 2 April, when Azerbaijan shelled the occupied territory for the first time in the last twenty years, is a reminder of the instability of the European south-eastern border. However, Federica Mogherini’s recent visit to Armenia confirms that the Caucasus remains a priority for the EU. Nevertheless, if the EU wants to contribute to increasing stability in the region, it must develop a differentiated strategy in which the history and circumstances of both Armenia and Georgia are taken into account. Additionally, closer cooperation with the civil society is vital to raise awareness of the  benefits of the ENP among the population and to counteract the effect of powerful pro-Russian propaganda.