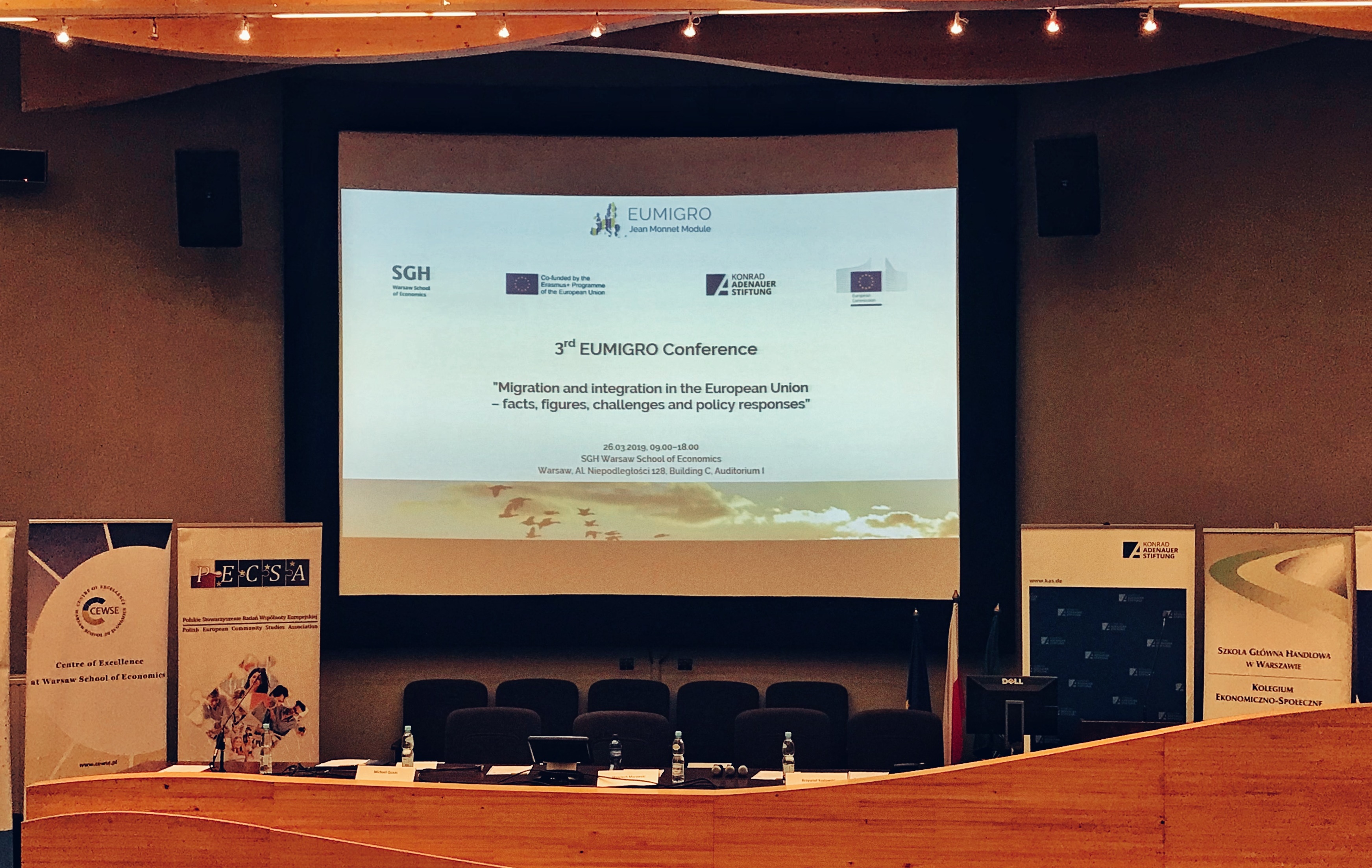 Throughout the last years, Europe has experienced the biggest movement of people since the Second World War, with migration becoming one of the most pressing challenges faced by the EU.  A sustainable solution to this problem, based on shared responsibilities, has yet to be found.

The increasing politicization of migration, the EU’s immigration and integration policies as well as the external dimension of EU migration strategies are crucial topics in the ongoing European debate. Those issues were discussed at the 3rd EUMIGRO Conference that recently took place in Warsaw and was attended by students involved in the “Migration and Human Rights Society” of the College of Europe in Natolin.

The politicization of migration

Since migration flows peaked in 2015, the EU has experienced a re-emergence of the concept of state sovereignty which now seems to over-shadow the principle of solidarity and, more specifically, the principle of burden-sharing, which once stood at the core of the EU integration process. Increasing “politicization” of migration thereby stands in the way of the development of effective migration policies. European public opinion is increasingly driven by the fear of a “migrant invasion” – in fact, statistics show that Europeans are deceived by their misperception of the number of legal migrants in the EU, often estimating the proportion of immigrants in the total population to be much higher than is the case in reality. Asked about the percentage, Poles identified immigrants to make up 10 percent of the Polish population – compared to 1.1 percent confirmed by Eurostat.

This misperception, combined with the public opinion’s popular request for EU or domestic institutions to intervene and effectively provide border protection has, unfortunately, facilitated the creation of a breeding ground for the anti-immigrant narrative of right-wing populist parties such as the French Front National, UKIP in the UK or the German AfD. EU member states – often constrained by their domestic politics – become veto powers that hamper the development of effective migration policies. As politics seems to freeze European migration policies, overcoming this stalemate will pose a crucial challenge in the near future.

The EU’s paradoxes of migration and integration

Starting off as a sovereign competency of the national state, immigration policies have become increasingly “Europeanized” under the Maastricht and Amsterdam Treaties which introduced intergovernmental cooperation on migration and asylum to the EU’s institutional framework and provided EU institutions with additional powers to introduce and harmonize legislation in the area of asylum. The policy field now encompasses the standardization of asylum procedures as well as several directives regulating the return of illegal migrants and family reunification. Governance on immigration has therefore been characterized by a top-down approach between the EU and EU member states while cities – often most directly confronted with the implications of immigration – were not significantly involved in the formation of policy. With the challenges stemming from the politicization of migration, national and local immigration policies are expected to “decouple” as cities will likely take policy directions very different from their national governments. Such lack of coordination between different levels bears the threat of producing contradictory policies which would diminish their effectiveness.

In contrast to that, developments in the formulation of integration policies point towards a more multi-level approach to governance. While such policies on integration were, up until the 1990s, generally non-existent, they started to emerge upon the initiative of both countries and cities. The latter have been continuously pressuring national governments to provide support for local integration policies and are increasingly interacting with the European level – for example building relations with the European Commission. Multi-level governance on integration, allowing for increased convergence of such policies, seems therefore more likely than in the area of immigration.

Since 2015, the EU has presented and implemented proposals for a variety of external actions in the area of border management, the fight against people smugglers and cooperation with third countries. Operations Triton and Poseidon were complemented by the launch of Operation Sophia in the Mediterranean whose future – due to current disputes between EU member states – is uncertain. More controversial proposals, for example the establishment of migrant processing centers in third countries – an idea supported by the European Council in 2018 – have been rejected.

Recent initiatives have been put forward by French President Emmanuel Macron who proposed to transform Frontex into a European police guard agency that would have the competence to go beyond the mere provision of support to EU member states. The idea of establishing a true European body is seen as able to circumvent the current mutual distrust in the functioning of the Schengen zone and, by that, reduce the risk of a further dissolution of the Schengen Code. Both Macron and German Chancellor Angela Merkel support the idea of reforming the Dublin system as well as strengthening cooperation with third countries. Those policies are however challenged by several member states on the grounds of concerns over sovereignty and effectiveness. Although cooperation with Africa seems to be one of the few areas where a common European approach might still be possible – in particular the development of a “new Marshall Plan” for Africa – discussions about a new long-term budget are likely to slow down the process. Developing a unified European external strategy in the field of migration will therefore remain a challenge in the upcoming years.

These developments leave us wondering where the EU and member states are heading. Should we not draw from the practice of past centuries that moving together – even in smaller groups – is preferable than suffering from an environment of uncertainty, nationalism and blockage? The migration crisis seems to be less related to migration itself but rather caused by the incapacity of European member states to decide on a common system. The current gridlock created by this political crisis will, however, only be overcome by a multi-level strategy that builds on the engagement of state and non-state actors as well as volunteers who are able to help locally.