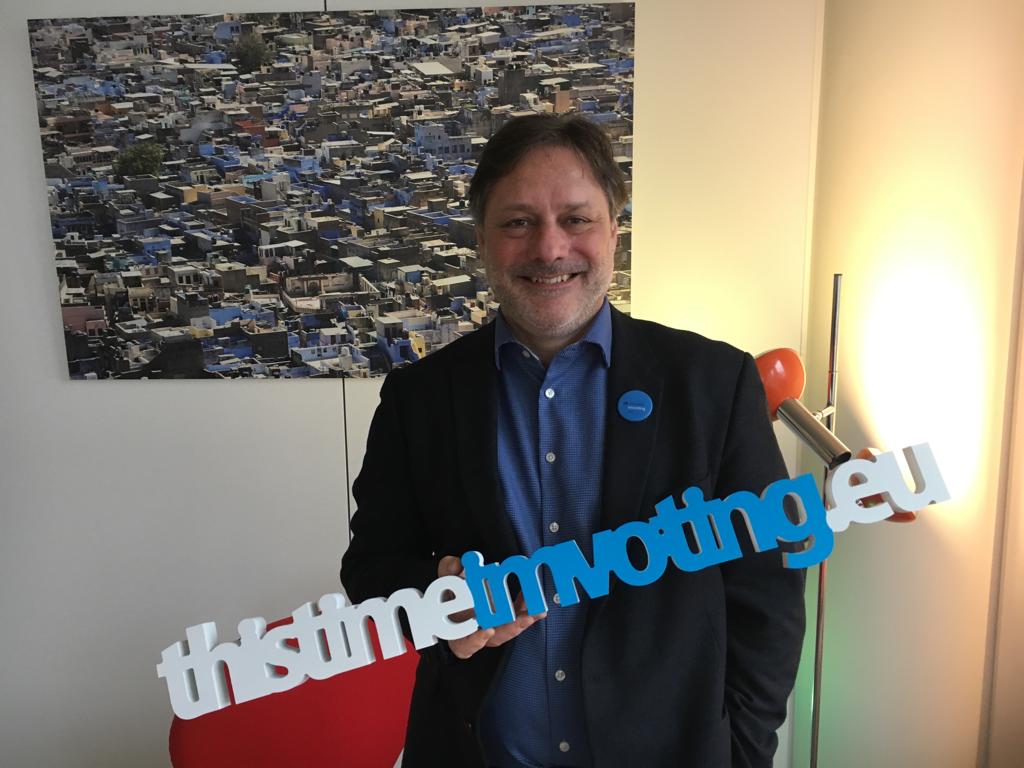 This article is based on an interview with Stephen Clark, the Director for Liaison Offices of the European Parliament, conducted on the 22nd January 2019.

When we first met Stephen Clark at a volunteers’ meeting for the #ThisTimeImVoting campaign at the European Parliament’s Liaison Office in Warsaw, he quickly showed himself to be a very open personality with a pleasant way of responding to his audience. With a quip and a few short words, he created a comfortable atmosphere straight from the outset, and any question from the public could count on an emphatic response.

The day after it was our pleasure to interview him at the Natolin campus of the College of Europe, and again he enthusiastically engaged us on the goals, methods, past and future of the European Parliament’s election campaigns.

Mr. Clark has been heavily involved in the Parliament’s campaigns to promote voting in European elections for ten years. Now he oversees an unprecedented grassroots campaign under the battle-cry of #ThisTimeImVoting, in preparation for the European elections on 23 – 26 May of this year.

He admits himself that it is unusual for any parliament to run an institutional campaign promoting election engagement. The multilingual and complicated nature of its functioning, however, have led the European Parliament to set up a strong communications capacity that is now very well suited to reaching out across Europe and supporting democratic action.

Voting is a habit

ThisTimeImVoting makes use of a wide array of channels to broadcast its message: national media, local media, social media and online influencers. No method is left untested to bridge the gap between Brussels and its European citizens.

Yet, this is not even the most important part of the campaign. That part is operating at the grassroots level, a campaign calling upon young Europeans believing in democratic values to self-organise into a movement. Here, the Parliament just provides a framework and offers support if asked, but it is up to the participants to use their energy and enthusiasm to build awareness of the coming elections and the chance for political participation it offers.

When asked why ThisTimeImVoting focuses so heavily on Europe’s youth, Mr. Clark’s response is quite practical. The Directorate-General for Communication of the Parliament has done the research, and it turns out that young people are most predisposed towards taking an interest in the way European affairs impact their lives, while at the same time being least likely to have voted in previous elections. It is thus with these citizens that the campaign can expect maximum effect.

Young Europeans are not only the future of our continent, they also are probably the most interconnected generation ever, and many of them are highly interested in political causes. Paradoxically, they vote in low numbers. We asked Mr. Clark for his opinion on this situation, and he believes many of them are weak abstainers, that is to say they are interested in voting but end up not doing so for minor reasons. Think of things like bad weather, a previously set social engagement or not knowing where the polling station is.

Crucially then, as Mr. Clark says: “The trouble is that voting, to me, seems like a habit, and […] if you vote for the first time when you are 18, then you are much, much more likely to vote the next time […] and the next time”. Traditional structures that encouraged people to vote, like political party membership, are in decline, and political activism is much more fractured in single issue campaigns and movements. For young people, the voting habit is not acquired in the same way as previous generations, and it has not yet become automatic.

As Mr. Clark noted, the mechanism of the traditional voting system, with pieces of paper in physical polling stations, does in a sense not even seem to belong in the world young people inhabit. In an age when all modern conveniences can be delivered to your doorstep with a swipe on your phone, e-voting would be a sensible step to increase participation.

Luckily, countries like Estonia have already started testing out such systems. Until the technology is ready, however, we have to convince people that they still have to go to the voting booth to make their voice heard.

How then to reach out to the new generation and instil the habit of voting in them? “By communicating with them in the way young people communicate themselves, through a mixture of social media channels like YouTube, Instagram and Facebook”, answers Mr. Clark.

But when discussing real-world contact, Mr. Clark also mentioned the interesting development in campaigning where a marriage is formed between precise targeting through big-data analysis and face-to-face interaction on the local level. It is this direct contact with one’s peers that has the biggest impact, and it is for that reason that ThisTimeImVoting attaches great importance to being present in physical locations, like on university campuses and neighbourhood squares.

Communicating about the European Parliament: from complexity to accessibility

To illustrate the complexity that characterises the European Parliament, he uses the example of the House of Commons, the lower house of Parliament of the United Kingdom: “If any Brit is turning on the TV and seeing in the Chamber the Prime Minister’s question time, you know broadly what’s going on. You know the government, the opposition, you know who the Prime Minister is. You understand people’s accents, you understand what they’re saying in terms of language and so on. That isn’t the case with the European Parliament”.

The European Parliament has a strong communication capacity, which it has built up over the years. This communications potential should be used in particular during the elections period. The elections campaign is not only meant to encourage people to go to the polling booths, but also more generally to raise awareness about what the European Parliament is, what it does and how it serves the EU citizens.

The campaigns follow one another but do not look alike

Mr. Clark has been heavily involved in the last three elections campaigns of the European Parliament. During his first one, in 2009, he was head of the Web Communications Unit, and he has been the general coordinator leading the effort since the previous 2014 campaign.

Each elections campaign is different. He explains that whereas the 2009 campaign saw the very beginning of the use of social media by the Parliament, 2014 was about professionalising the elections campaign to a greater extent. “We opened up the first Facebook account of the Parliament and it was considered at the time as incredibly risky, very bold. The sky was going to fall in because of what we were doing, because we couldn’t control what people were going to say. (…) It was only very little time later that it was completely normal to use all these channels. In 2014, we could say that we professionalised the campaign in a way we hadn’t done before, with a kind of branding effort and the logo. Also, we focused very heavily on the political procedure made by the parties (Spitzenkandidaten procedure), which was the first time that we bet so heavily on that procedure being successful, and, in the end, it was.”

Mr. Clark considers that for the 2019 campaign the novelty lies in the ground-game efforts which are of an unprecedented scale. This focus on the ground-game initiatives comes, as he explains, from becoming aware of and responding to both the current general distrust of people in the institutions, the elites and the establishment, as well as the radical changes that have occurred in the media landscape in the past few years.

Comparing the situation in 2009 and 2019, he notices that “compared with 10 years ago, it’s an unrecognisable media landscape that we have now. It’s much more fragmented, much more driven by what you might call ‘non-traditional’ sources of journalism (…). Fake news is obviously now a huge subject, that everyone is discussing. The environment in which we work is then very different today from what we had before (…)”.

Lessons drawn from past experiences

Mr Clark also revealed some lessons learned from past elections. They include the need to produce less (e.g. leaflets, posters, etc.) and spend more time on the spot to distribute these materials, and adapt the campaign even more to the different local contexts. Hence, greater attention has been paid to local operations and initiatives, and European Parliament Liaison Offices have been granted substantial autonomy and resources.

As for how the first stages of the current campaign can be assessed, Mr. Clark expressed his optimism and enthusiasm: “I really and honestly think we are on to something here. It remains an experiment, it remains something new. We are on a learning curve. (…)” Over 140.000 people have connected with the campaign and the organisation already boasts about 14.000 volunteers. “We would like to see that figure go up quite a lot. But it is impressive to see how many volunteers have come forward”.

The slogan “Act. React. Impact.” for the 2014 campaign was criticised because of its lack of clarity and effectiveness. Both were issues which were exacerbated by the language translation process. Mr. Clark considers the straight-forward “This Time I’m Voting” slogan, which serves as the bedrock for the 2019 campaign, as catchier and more impactful.

Mr. Clark shares his excitement as we are getting closer to the end of the campaign: “We believe that we will have a powerful end of the campaign in the last couple of months, which will give us a great basis not only to mobilise the communities that have been created in the meantime, but also to spread the word beyond, into the general population”.

ThisTimeImVoting: make it yours!

It is up to the citizens to convince their networks to go to the polling booths this spring. By using their own tonality to create their personal messages, they will be better able to persuade their friends and family to go and vote than any policy wonk or politics guru in suit and tie could. People are far more likely to pay attention when the message is coming from individuals who are similar to them, for example friends, people they know, people they identify with, and people they trust. If your relatives doubt the importance of voting, ask them any of these questions: “how do you feel about the way things are going in Europe generally?”, “Are you happy with it or would you like to see things to be going differently?”, and “Are you aware that you have influence over the direction of travel Europe will take in the next five years?”. All it takes is a few minutes in May. This time we will make our voice heard, this time we can’t be stopped, because this time we’re voting!

More information on the upcoming elections at www.european-elections.eu.

More information on the ThisTimeImVoting campaign on www.thistimeimvoting.eu.