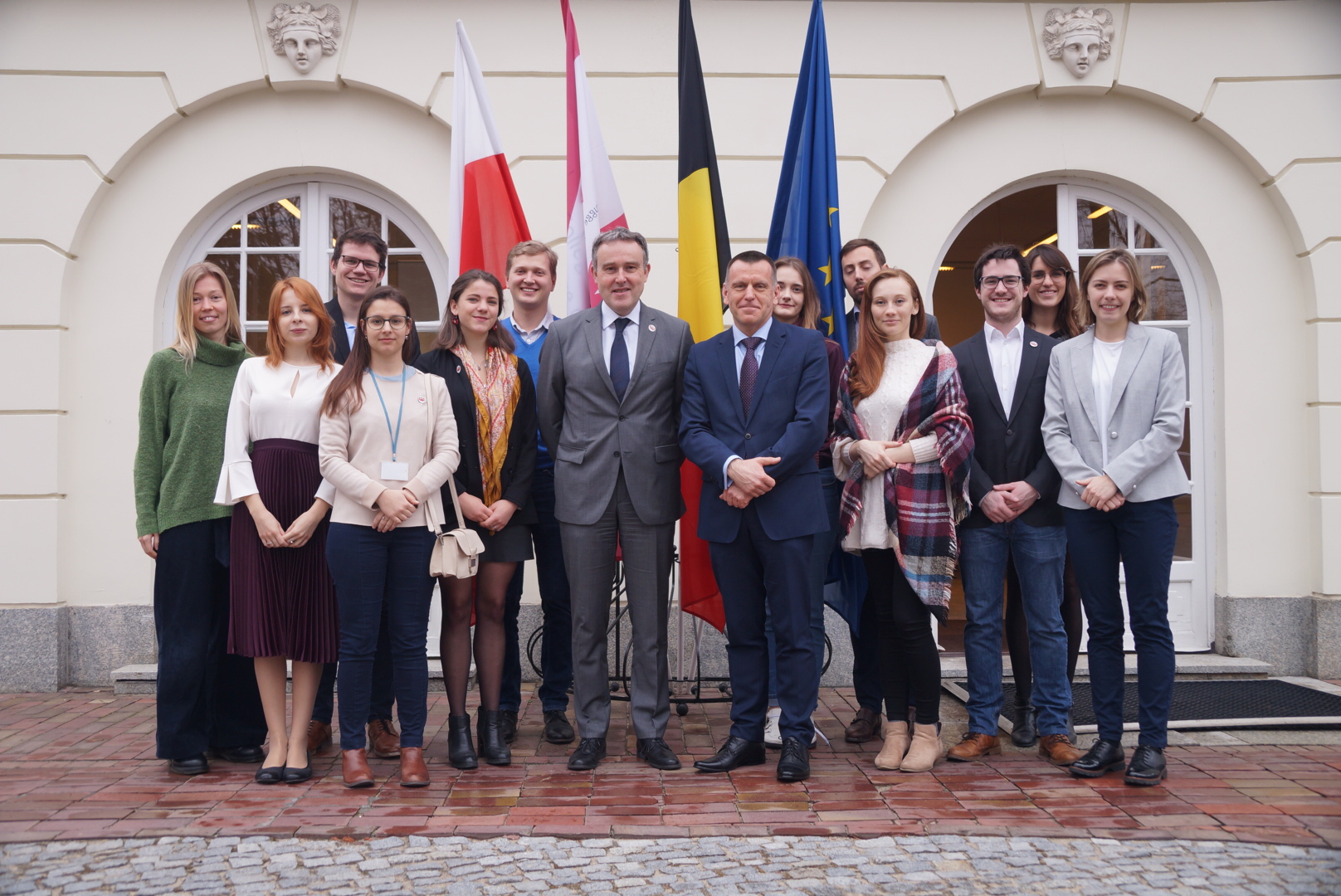 This year, the Belgian National Day at the College of Europe in Natolin brought an opportunity to discuss Polish-Belgian ties. And there was also something to celebrate – the centenary of diplomatic relations between Belgium and Poland.

The exact date when the Belgian-Polish bilateral relations started is and will perhaps remain a mystery. Due to confusion in the archived correspondence between the two countries, there is no consensus whether diplomatic relations between Warsaw and Brussels began either on the 6th or the 10th of March 1919.

Yet, perhaps coincidentally, the Belgian National Day at the College of Europe in Natolin took place on 6th of March this year, the day (or, at least, the week) that marked the centenary of diplomatic relations between Belgium and Poland. In order to commemorate this date, the Belgian Ambassador to Poland, Luc Jacobs, as well as the Polish Ambassador to Belgium, Artur Orzechowski, joined the students in Natolin and shared their views on the state of bilateral relations and common challenges.

‘Blowing the candles’ at the UN Security Council

2019 is an all the more important year for both countries, as Poland (since 2018) and Belgium (starting this year) are both sitting on the United Nations Security Council (UNSC) as non-permanent members. For Poles, it was very significant to be elected for the 2018-2019 term, which coincides with the 100th anniversary of the restoration of their country’s independence. For that reason, Ambassador Orzechowski said that Poland had been campaigning for a very long time and made the utmost effort to have that seat on the table precisely on the date of its centenary. Moreover, as Belgium begins its 2019-2020 term, Ambassador Jacobs said they are benefiting a lot from the experience that Poland has gained at the Security Council since last year.

Both countries, together with Germany (the third European non-permanent UNSC member), have set up consultation mechanisms to bring their common position to the table and prepare the terrain for a proposal that would then be addressed to the so-called ‘P-3’ (the Security Council permanent members France, the United Kingdom and the United States), and afterwards seek the support of the two remaining ‘permanent five’ member states, namely Russia and China. Among the topics proposed by both countries, civilian protection, protection of religious minorities and Ukraine stand out. On the latter, Poland and Belgium have co-sponsored a meeting on the 5th anniversary of the Russian annexation of Crimea on March 15th, in a format called the “Arria meetings” – namely, informal meetings initiated by members of the Council to hear opinions and voices from governmental and non-state actors on a given topic. The meeting addressed concerns over the implementation of the Minsk accords and the respect of international law in the Black Sea and the Sea of Azov following the latest developments in the area.

Both Ambassadors stressed for the importance of finding “a common EU voice” at the Security Council, as well as to defend multilateralism and international law. Yet, neither was very optimistic about the German proposal to turn the French permanent seat at the UN Security Council to a common EU seat after Brexit. According to Ambassador Orzechowski, it is better for the EU to “keep what we have” since the proposal could open Pandora’s box and lead to many disagreements among member states. Still, Ambassador Jacobs was quick to point out some stepping stones, such as the ‘joint presidency’ of the Security Council that France and Germany are holding in March and April this year, a one-of-a-kind initiative in the history of the United Nations.

A year of multiple milestones

Belgians and Poles have a lot to celebrate together this year. In their 100 years of bilateral relations, they have built strong ties in terms of investments and trade (particularly in the construction and agro industries as well as chemical sectors). Ambassadors Orzechowski and Jacobs were proud to state that the Polish presence in Belgium was prominent, and vice versa. Moreover, bilateral relations among both states are also of concern to Belgian regions, as Flanders, Wallonia and the region of Brussels (as well as its different communities) can arrange their own investment deals with other countries. Defense is another important area of cooperation, particularly in the framework of NATO, as both countries have troops stationed by the Baltic Coast and participate jointly in strategic and capacity building programmes.

But that is not the only milestone on Belgian-Polish bilateral relations. September 6th will mark the 75th anniversary of the 1st Polish Armoured Division of General Stanisław Maczek crossing the pre-World War II border of Belgium and liberating several Flemish towns. ‘Maczek’ is also the name of an 8% craft beer made by the Belgian brewery Brouwerij de Poes, precisely for the commemoration of the anniversary of Polish-Belgian diplomatic relations – and that Ambassador Luc Jacobs had the chance to present to College of Europe students that same evening, to put an end to a special Belgian National Day in the heart of Poland.