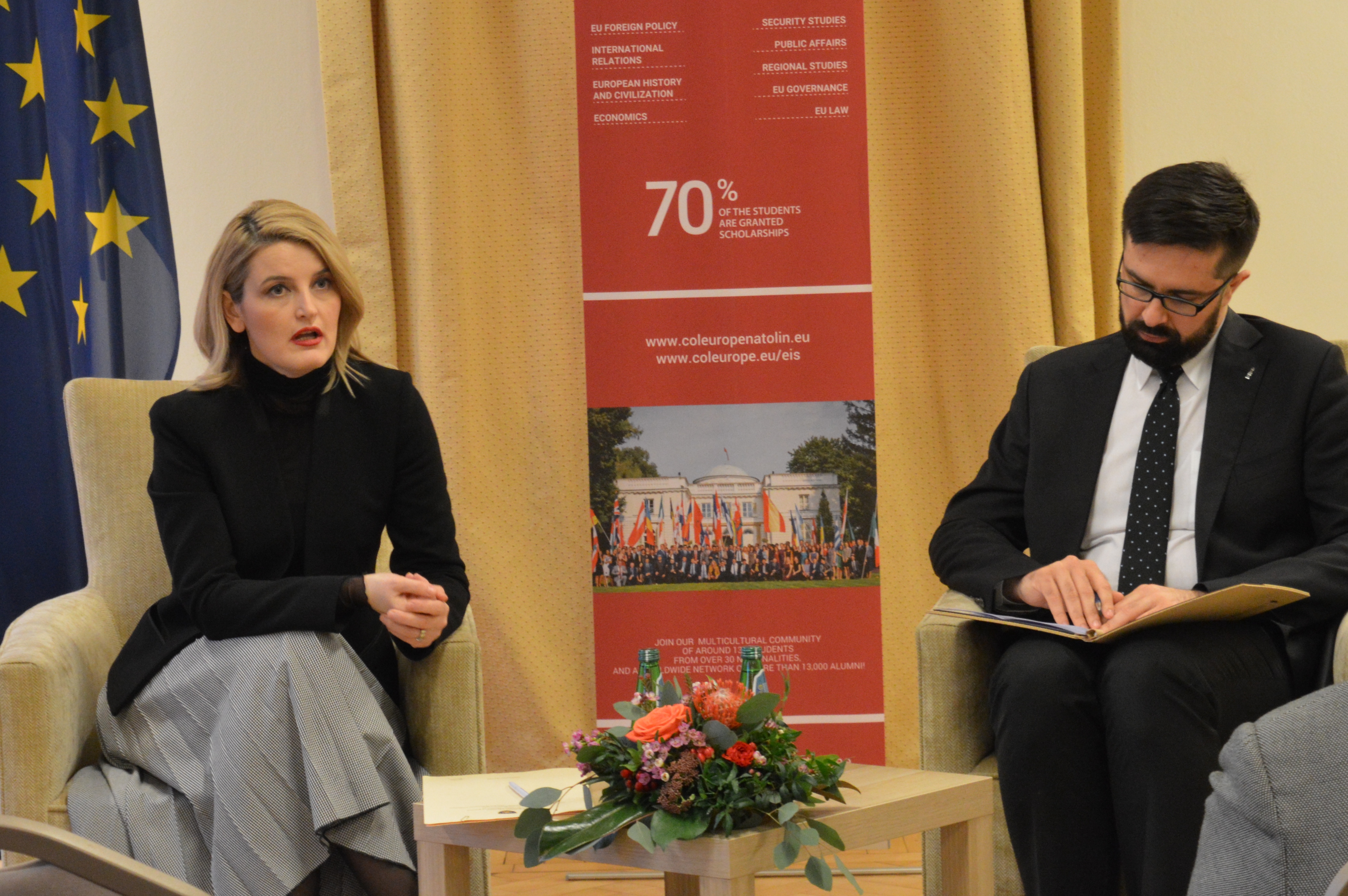 How does a newborn country of 1.8 million inhabitants, struggling to be recognized by many, prepare for a future within the EU? According to Dhurata Hoxha, Kosovo’s Minister of European integration, the only future for Kosovo is a Euro-Atlantic one – in which Kosovo is strongly embedded in the institutional frameworks of NATO and the EU. Many obstacles will need to be addressed in the rocky road towards accession, but with 60% of the population younger than 35 and a strong appetite for change – there is no doubt that Kosovo has once and for all turned the dark pages of its history.

Open borders and greater mobility will have serious consequences for a small country like Kosovo. US-educated Minister Hoxha seems aware of the difficulties of keeping the ambitious on board. Asked about the brain drain, Hoxha underlined that it is a worldwide issue faced by many and that a large community abroad also comes with its advantages: “Our diaspora provides 30% of Kosovo’s GDP and while young people might move, they will continue to be attached to our country. We would like to see more from our diaspora in terms of their direct investments in Kosovo”. Nevertheless, Hoxha stated “that brain drain needs to be addressed by enhancing the possibility for career advancement in Kosovo”.

Attempts to augment opportunities for young professionals and graduates have so far barely paid dividends. In last year’s report on reform advancements in Kosovo, the Commission declared: “No progress was made on improving the quality of education and addressing skills gaps in the labour market”. It remains to be seen how Kosovo will increase its competitiveness in the coming years.

Mobility seems to be on the top of the minister’s agenda. Visa liberalization is often mentioned on her Twitter feed and was also one of her main talking points at the College. According to the minister, all requirements have been met by Kosovo but visa liberalization has so far not been granted. It is a sensitive issue as it illustrates the frustrations experienced by many countries in the process of accession: “You cannot only offer sticks and no carrots, it really kills the motivation. The EU should start thinking of its credibility”.

Besides mobility, bigger issues are at stake in Kosovo’s relations with the EU and its neighbors. Kosovars strongly favor Euro-Atlantic integration because of the fragile peace in the region. NATO membership is a priority for the minister who supported last year’s legislation to transform the lightly armed Kosovo Security Force into an army. NATO headquarters, however, did not view this move in particularly positive light. Jens Stoltenberg, NATO’s Secretary General, declared, “I regret that this decision was made despite the concerns expressed by NATO”.

Opinions are divided on whether relations between Kosovo and Serbia are improving.  Belgrade has expressed several concerns, not least about the creation of the armed forces. Last week, Kosovo set up a state negotiation team including representatives from the opposition to address the pressing issue of land swaps between Serbia and Kosovo. The idea of border changes has been put forward by Kosovo’s President Hashim Thaçi and Serbian President Aleksandar Vucic, as a way of ending the long-running frozen conflict and clearing a path to EU membership.

Eventual border changes will be mediated by the EU and embedded in a heavy framework of additional conditions and provisions. According to the minister, the dialogue “should not be hindered by conspiracy theory and any deal, to be sustainable, will need to have mutual recognition and the closure of all open ended issues like membership of EU, NATO and the UN”. So far, Serbia has not recognized Kosovo as an independent country.

In the meantime, both Kosovo and Serbia are working towards the same goal: EU membership. Both countries can only move forward in the accession process if they both move ahead in constructing peaceful and lasting relations with each other. Minister Hoxha seems to be aware of this, as she stated in her concluding remarks, “either the region proceeds as a whole or we keep dragging each other down”.