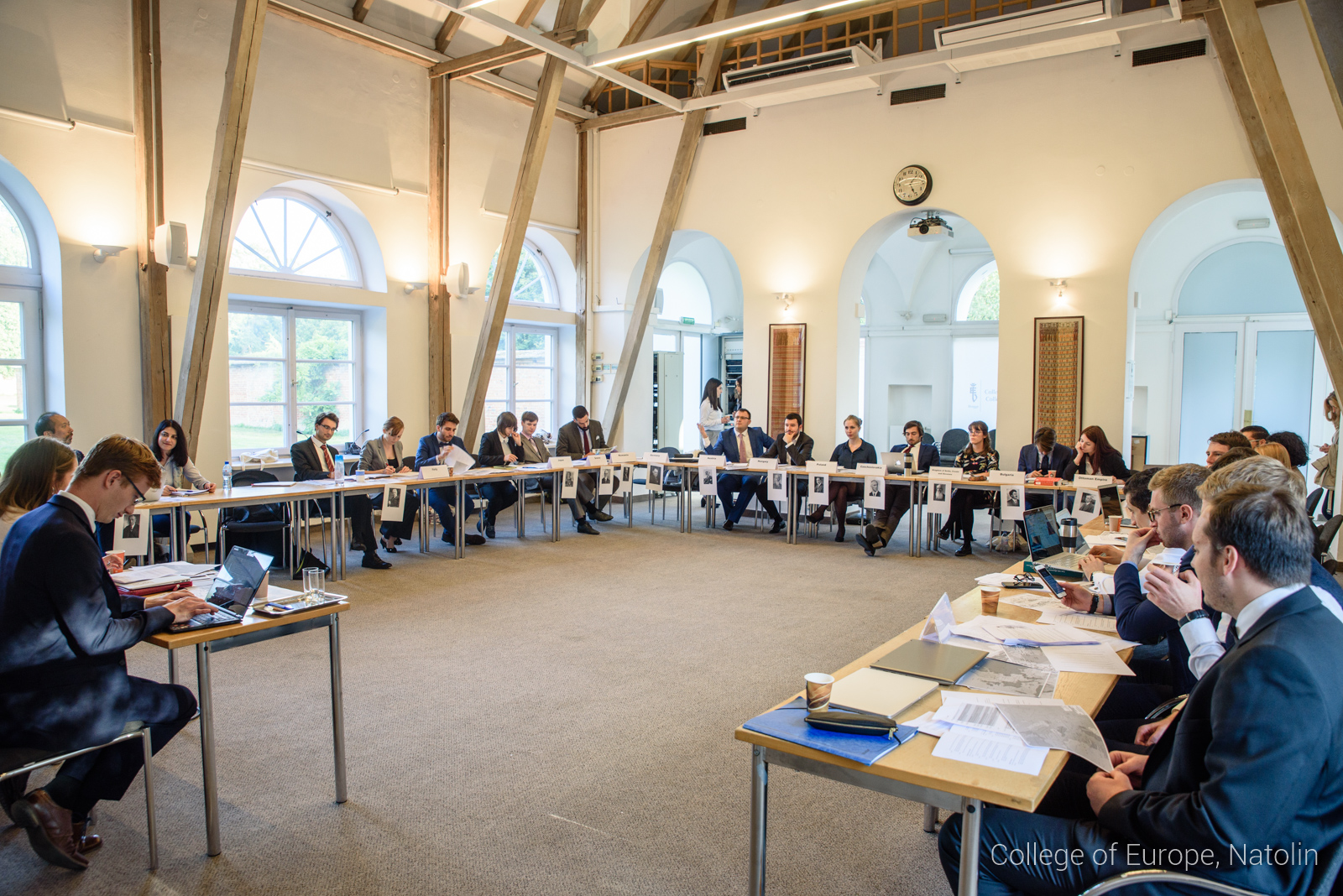 A historical journey in times of war and peace. Manuel Marin students are simulating the 1919 Paris Peace Conference.

“This system is somewhat novel.  Our desire in asking you to proceed thus is to save time.  All the nations represented here are free to present their claims.”[1] With these words Prime Minister of France, Georges Clemenceau, opened up his speech at the Peace Paris Conference in 1919. It practically described the atmosphere in which the students of Manuel Marin promotion of College of Europe in Natolin also engaged in a very enriching and unique simulation game of the Paris Peace Conference.

For half of the day, students representing more than 30 national delegations had the opportunity to become part of international negotiations and to acquire a better sense of politico-diplomatic affinities at the beginning of the XXth century. They created their strategies and were involved in intensive lobbying, vivid discussions and ultimately played their role in order to achieve the delegation’s goal and objectives. Moreover, during this exercise, the delegates faced unexpected evolutions or scenarios, subsequently influencing to some extent the final outcome of the simulation game. Of course an afternoon simulation like we have done has its own dynamics and results, clearly distinguishable from those of the historical Paris peace conference of 1919, which lasted much longer and took place under considerably higher duress.

The clearest difference might be that despite everyone’s best efforts to own the roles of the historic characters that they were given to play (sometimes with great passion), this is still entirely different from actually being that character. As a consequence, many considerations, interests and preferences that played a role in the historical agreement were absent. An example was students’ opportunistic use of the absence of anyone representing Ukrainian interests to hand all of Ukrainian Galicia to Poland for an easy win in the second simulation. Additionally, with us being the young, bright-eyed, idealistic Europeans of the Future that we are, there was a great willingness to forgive and compromise on a number of issues, including some old rivals coming quickly to mutually beneficial one-on-one deals. In general this seems to have helped us take the sting out of a number of subjects that historically were much harder to deal with. But even more striking than those differences are the ones between the two simulations, held a week apart from each other.

The first simulation conducted their negotiations by allowing every member to speak in the order in which they were seated first, and then turning it into an open discussion on how to solve the outstanding issues.

For the second simulation, on the other hand, the big four countries (the USA, the UK, France and Italy) had met and discussed a draft Treaty a week in advance, which was only shared with the other parties on the morning of the simulation. The negotiations themselves were conducted according to a strict hierarchy where the big four always demanded to make their points first, before any other nation was allowed to take the floor. The axis powers were not even allowed to speak until everyone else had had their say.

These differences have had a great impact on the dynamics of the simulations. In the first simulation, the open negotiations allowed some of the smaller countries to get much more of their demands acknowledged than they might otherwise have. In the second simulation, the big four countries ran the risk of alienating many of the smaller countries by ignoring their demands and basically placing them before a fait accompli, which necessitated some reassurance of those smaller partners later in the simulation in order to salvage the deal.

What then have we learned from this exercise? First of all that it pays to make your preparations in advance, and secondly that a cooperative stance is much more likely to lead to a deal that is acceptable for everyone than setting a bunch of red lines and unnegotiable demands (insert your own Brexit joke here).

More in general, the peace conference simulation has been a great training in practical negotiating skills and in developing an interpersonal approach to convincing people to go along with your proposals. As a tool for historical education we would argue that its effects are somewhat more mixed. It has definitely gotten people interested in and even passionate about the history of the Paris Peace Conference and the demands with which the various parties came to take part in it. But like we already mentioned, many historical considerations and preferences have been omitted out of necessity, often creating very different dynamics and outcomes. This leads to the question whether students will in the end remember the circumstances and eventual outcomes of the conference as they historically were, or just as they were in the simulation. Of course this is pre-empted by the assumption that students will prepare for the simulation by reading up on all these facts, but this might not always happen and in any case there would still remain room for confusion of history and simulation.

Nevertheless, the simulation exercise helped the students to realize the importance of the differences between the realities of the conference and the national interests pursued by each delegation at the time. It also served as a great opportunity to reflect on the importance of peace and its value in the context of the First World War.

The simulation game ended up on a very enthusiastic note and we are looking forward to the next opportunities to participate in such events!