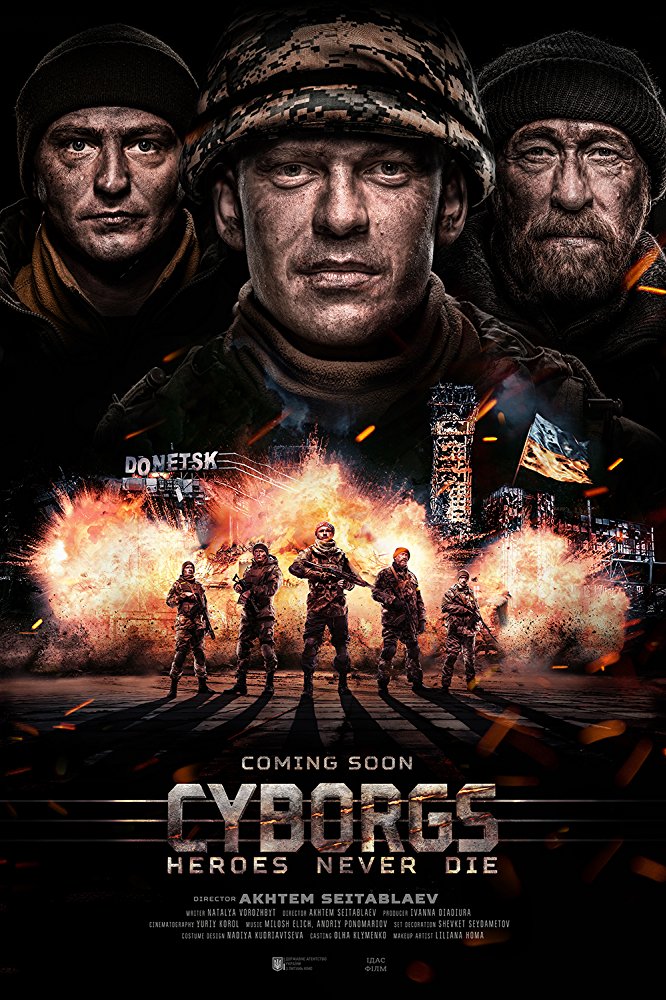 Movies are powerful tools in the battle for hearts and minds. Could they become an effective weapon in this century’s new information wars?

I never thought that I would ever need to be reminded about the war on the territory of my country, Ukraine. However, living far from the area of military activities makes one assume a deceitful feeling of security. On top of that, living abroad, one starts perceiving the situation as an observer, rather than as a participant. I had been in the position of an independent observer for quite some time. Then, the screening of the film “Cyborgs” at Natolin’s 3R Symposium woke me up and harshly but firmly brought me back to a reality which I had been unintentionally escaping.

The birth of new people

The film “Cyborgs: Heroes Never Die” is a Ukrainian military drama about the battle for Donetsk airport during the war in Donbass (Eastern Ukraine). Akhtem Seitablaiev, the director of the film and a prominent Ukrainian Crimean Tatar actor and director, emphasizes that “Cyborgs” is about peace rather than war. Indeed, the main characters – Ukrainian soldiers, mostly volunteers, who are defending Donetsk airport – talk mainly about peace, their motivations to fight, love to their motherland, history lessons that were not learned; they argue about the role of art and literature. They speak both Ukrainian and Russian. Despite the fact that this is a war drama, there is a lot of humor in the film, which makes the ambiance of every scene even more vivid and true-to-life. In fact, this is one of those rare and precious cases when one can feel like a participant in conversations by simply watching a film. After battles, the main characters discuss how they see their input into building the country where they want to live and where they dream their kids would want to live. As the director Seitablaiev puts it: “This film is about the emergence of a new Ukrainian political nation, the birth of new people.”

“Cyborgs” has been playing in Ukrainian cinemas since 6 December 2017 with great commercial success, which is certainly a record case for a film of this genre. Now it will be distributed in Europe, and soon broadcast on TV.

Ukraine, as well as the EU and the US, have been losing the information war. So far, the West has not found many effective methods to confront Russia on the information frontline. The newly set up High Level Expert Group on Fake News and Online Disinformation in European Commission issued its first report on 12 March 2018, and it introduces the same conclusions that have already been discussed numerous times by other experts all around the Western world. It is high time we move on and start acting.

The only method of fighting in information war that we have used so far is debunking disinformation and this has proven ineffective. No wonder; it is much easier to make up a piece of information and spread it nowadays than it is to detect, check and debunk it. Education and media literacy, as many experts agree, are essential tools in general but their impact will only be felt many years from now. There is also very little we can do about disinformation in our legal frameworks, as any attempt to police it clashes with our ideas of freedom of speech and freedom of the press.

Overall, we have to discover different ways and methods to counter the narratives of our enemies in the information war. First, we should fill in the information gaps in our societies, namely the gaps about cultures, languages, religions. We should share stories about one another, since we very often know so little even about people who live in a different region within our own country, not to mention our or neighbors of our neighbors. Art and literature appear to be the most effective tools in this respect. When it comes to art, films are the most attractive medium through which one can easily reach the widest range of audiences. We can promote our values and moral norms through films, depict the truth, and endorse positive scenarios of events.

The power of cinema

Films are not just an escapist entertainment, as many of us tend to believe. They are also a powerful propaganda tool, which has been widely used for decades.  The film camera was essential during both World Wars. Seventy or a hundred years later, cinema can still be political: it contributes to forming people’s outlook, shapes political reality through introducing ideas and spreading beliefs. Due to this, cinema can help resist illegal actions, confront inhuman and immoral behavior. It can also challenge prejudices in religion, culture, politics, and the like.  We shouldn’t underestimate the power of a gripping story.

However, throughout history, we have had examples of movies used in propaganda for horrific purposes. Whether we take it seriously or not, “cinema is the extension of politics by visual means,” to quote Guy Westwell. Consequently, it is essential to be conscious of that and make sure we do not turn appealing art into disgraceful propaganda but use it wisely with good intentions. Everything is good when it is done within certain limits.

Winning hearts and minds is the only way to prevent people get into traps of disinformation. I firmly believe that the EU must invest in creating content that can be of emotional and intellectual appeal to its citizens rather than solely money on researching the influence of disinformation. Do we really still need proof that this influence is incredibly destructive?

The film “Cyborgs” is a superb example of how Ukraine can win the hearts and minds of its people. This is just a small step and it looks like a drop of pure water in the ocean of muddy lies and disinformation, but the beginning is always the hardest.