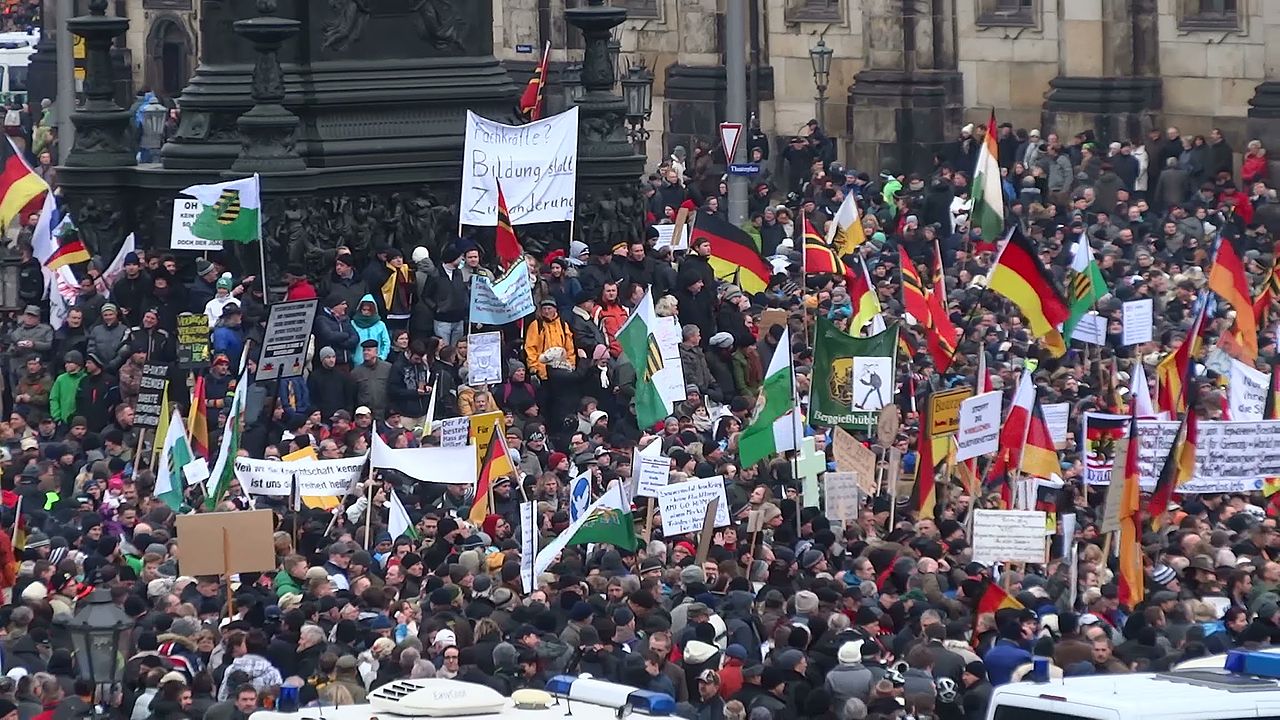 The rise of the German xenophobic movement ‘Pegida’ in late 2014 shocked the European public. Now, three years later, it’s time to ask what happened to right-wing populist activism in Germany and beyond. What is the position of the ‘Pegidians’ and similar groups in the European political sphere?

A sea of black-red-golden flags dominated the center of Dresden, the capital of the east German state of Saxony, on the afternoon of Sunday, October 28, 2017. Around 3,500 demonstrators had gathered in order to march together through the historical center. The occasion: the third anniversary of Pegida, a German xenophobic movement. The acronym stands for ‘Patriotic Europeans against the Islamization of the West’ and gives a good indication of the character of the movement: the ‘patriotic Europeans’ are first and foremost against immigrants, especially Muslims, but also opposed to Angela Merkel and her government, and last but not least, stand against the European Union. The organizers of the demo had invited several guests who spoke to the crowd about Germany’s and Europe’s cultural and economic decline due to the alleged mass immigration of delinquent, barbaric Muslims. The crowd, mainly made up of middle-aged, angry men, answered: ‘Wir sind das Volk! (We are the people!)’ and ‘Merkel muss weg! (Merkel must go!)’. One demonstrator was arrested by police for carrying a swastika. Hence, all in all, a perfectly normal Pegida demonstration.

Populism on the Streets: the Beginnings of Pegida

Pegida emerged in the form of a private Facebook group in autumn 2014. Reacting to the plans of the Dresden municipality to build more homes for asylum seekers in the area, members of the group quickly decided to bring the protest to the streets. In late October, they organized the very first of their marches in Dresden’s historical city center. Around 300 people showed up to hear the xenophobic paroles of Lutz Bachmann, Pegida’s public face, and his companions. From that day on, Pegida called on the population of Dresden to join their marches week after week. In December, several thousand had already joined the demonstrations. In January 2015, a record number of 25,000 participants was counted. On the other side, around 9,000 counter-demonstrators ‘for a cosmopolitan Dresden’ confronted the Pegidians. The polarization in the media and political sphere only seemed to draw more people to the streets. Whereas some people spoke of Pegida as a movement of ordinary citizens using freedom of speech to protest against corrupt elites, the others condemned Pegida as a movement of neo-Nazis and fascists.

After its initial success Pegida’s fortunes rapidly declined. Divisions within the organizing team, compromising evidence of Bachmann’s far-right positions and a new ‘ignorance strategy’ by the German media led to an abrupt fall in participation. Still, Pegida has never disappeared: every week, on Monday evenings, a core of around 3,000 Pegidians continue to march through Dresden. With their flags, their slogans and speakers they created an image of Dresden as a ‘Nazi-city’, a no-go area for foreigners.

Populism in the Parliaments: the Rise of the AfD

While Pegida slid into political insignificance in early 2015, German right-wing populism has become stronger and stronger during the past three years and moved away from the streets and to the parliamentary corridors of regional capitals and Berlin. Today, right-wing populism in Germany is nearly synonymous with AfD – the recently established ‘Alternative for Germany’ political party. Founded in 2013, it was initially a Euro-sceptic (rather than Europe-sceptic), neo-liberal party with a clear economic focus. Soon, however, a populist-national wing took over its internal structures. Ever since, the AfD has been on the rise in regional and national elections. At the moment of writing, it is represented in nearly all of the regional parliaments. In some of the eastern German states, it has reached spectacularly high shares of the total vote, reaching 24,3% in Saxony-Anhalt. On top of that, in September 2017, it entered the German national parliament for the first time. With 12,6% of the total vote, the German 5% threshold for parties to enter the parliament was far from a problem for is. The AfD’s outcome in Saxony is especially striking. With 27% of the vote, it became the strongest party, beating even Merkel’s Christian Democrats (CDU).

However obvious the recent success of the AfD might be, the party remains a twisted grouping of political agitators and populists. It suffers from a severe problem of leadership. The initial founder, the university professor Bernd Lucke, left the party because it became too nationalist, too xenophobic, too extreme. The leader of the Thuringian AfD, the unteachable Björn Höcke continues to attract scandals and does not hesitate to openly voice his racist and xenophobic convictions in order to get public attention. As if the internal conflicts did not suffice, the prominent Frauke Petry, who led the party into the 2017 national election campaign, announced her withdrawal from the party only one day after the elections. The party’s relation to Pegida also caused some public controversies. AfD politicians presented the party as the ‘natural ally’ of the Dresden protestors. At the same time, the nationalist marchers gave the AfD what Die Zeit journalist Jana Hensel accurately related to as ‘street credibility’.

Right-wing populism in Europe as a political phenomenon is not limited to Germany. On the contrary: in most western European countries and beyond, right-wing populist and anti-immigrant parties have long been established and dominant actors within the national political scene. In 2017, right-wing populists reaffirmed their status within party politics across Europe. Geert Wilders’ Party for Freedom (PVV) came second in the Dutch parliamentary elections. Marine Le Pen (National Front, FN) received a third of the total vote in the French presidential elections. Heinz Christian Strache’s Freedom Party (FPÖ) will probably become part of the Austrian national government. The Czech Action for Dissatisfied Citizens (ANO) got 29,7% of the votes in the parliamentary elections and its leader Andrej Babiš, known as the ‘Czech Donald Trump’ in the media, will probably become prime minister. Right-wing populism is also well established in northern Europe, in the Scandinavian countries: both the Finns Party (PeruS) and the Danish People’s Party (DF) are represented in their respective governments or cooperate with them and are thus highly influential in policy making processes. Looking east, hardly a day passes without news about nationalist rallying cries and actions from Europe’s leading populist parties in government, Kaczynski’s Law and Justice in Poland (PiS) and Orbán’s Fidesz in Hungary, amongst others. And finally, let’s not forget that the outcome of the 2015 Brexit referendum was also largely due to a populist polarization of the British public.

Undoubtedly, Europe is haunted by a ghost – the ghost of right-wing populism. However, the phenomenon is not even restricted to Europe alone. The election of Donald Trump as President of the United States as well as nationalist-conservative governments in countries such as Australia, point in the same direction. Right-wing populism is on the rise all over the ‘western’ world. Despite the many obvious differences between the parties, politicians and their voters, there is something that most, if not all of them, have in common: a deep mistrust in the democratic institutions of their respective countries, in political elites as well as in conventional party politics. It is this feature, together with their glorification of the homogeneous people as the pure and genuine bearer of state legitimacy as well as national culture and tradition that makes them truly populist.

Where the populist mistrust in representative democracy stems from is one the most controversially debated topic in talk shows, feuilletons and social media around the world. Unfortunately, there is no simple answer to this complex question. In the case of Pegida and the AfD, the reunification of Germany and the resulting feeling of relative deprivation in the former eastern states surely play a crucial role. In the case of France and the Netherlands, the proportionally high influx of immigrants from former colonies might feed into the obsession with ethno-cultural decline. But how can xenophobic right-wing populism be explained in the case of the United States, whichclaimed to be a multicultural and multiethnic society for some time already? It becomes apparent that despite such claims, the American white middle class has never quite accepted the end of the Jim Crow Regime. Trump followers’ favorite slogan – ‘take our country back’ – has hit a raw nerve. Populists, and this applies to all of them, want to take their countries back to some glorified imagination of past greatness that might have never been real but serves as an excellent battle cry to attract voters.

What would happen if all these parties and leaders discovered their underlying similarities? What if these similarities outbalance their differences and aspirations of nationalist resurgence? A Populist International à la ‘populists, unite!’? Arguably, this is already the case. In the European Parliament, Euro-sceptic coalitions of Europe’s leading nationalists have formed. The AfD is in close contact with the Austrian FPÖ. The most successful, however, was Pegida itself. One of its members, Tatjana Festerling, decided without further ado to form a far-right coalition with populist movements from all over Europe. Her partner organizations range from the Estonian Conservative People’s Party and the Italian Lega Nord to violent Bulgarian citizens’ militias that ‘protect’ the European borders from illegal border crossings. In its founding document, the so-called Prague Declaration, the Fortress Europe coalition declares: ‘We will not surrender Europe to our enemies. We are prepared to stand up and oppose political Islam, extreme Islamic regimes, and their European collaborators.’ The primary objective is to close European borders and control, if not stop, immigration. If Europe’s right-wing populist parties are as successful as Pegida in overcoming their differences by creating their own flexible version of conservative-nationalist-populist politics, a Populist International seems a quite probable scenario.