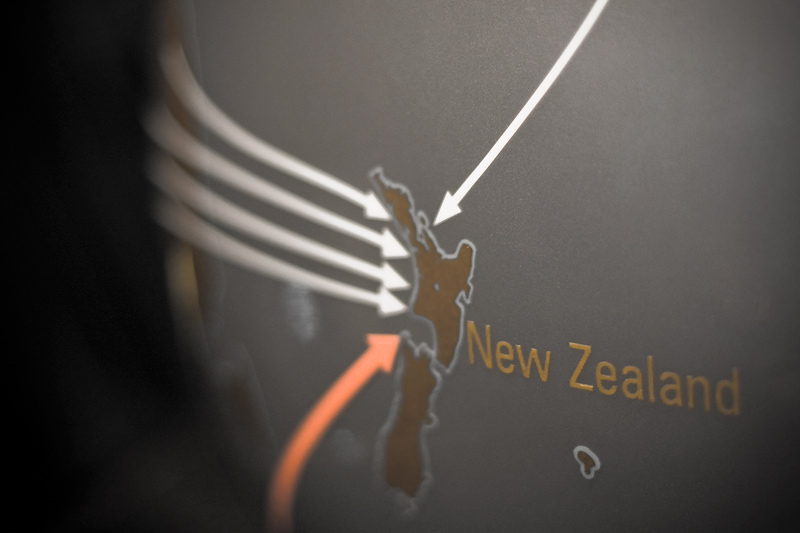 Since the beginning of its colonial period New Zealand has always been in the shadow of larger powers, bucked and tossed about on the waves of the international system. In World War I and II there was not even a moment’s hesitation before declaring war on the Axis powers and marching thousands of the New Zealanders off to war – to Gallipoli, the Somme, Ypres, Crete and Al Alamein. Many in New Zealand consider the ANZAC[1] campaign in 1915 to be New Zealand’s formative moment, the first time one could speak of a nation of New Zealanders.[2] Certainly, by the end of World War II the climate in New Zealand suggests that people felt betrayed by the British, who had promised to protect New Zealand only to be left in the lurch when it really mattered.[3] It was only the attack on Pearl Harbour and the involvement of the US in the Pacific War that saved us. With the eclipse of the British Empire, New Zealand looked to the new world super power for protection against the spectre of international communism, the red wave as it descended through East and Southeast Asia, one domino after the other.[4] When the powers came calling we responded, sending men and boys to Korea,[5] Malaysia,[6] Vietnam, and most recently Afghanistan.[7] Always in the shadow of others, New Zealand has never had a real foreign policy of its own – until now.

Cast adrift following the breakdown of the ANZUS alliance[8] with the United States and Australia in the late 1980’s for it staunch anti-nuclear policy, New Zealand has had to walk a tightrope in its relations with foreign powers ever since.[9] This has limited its options in foreign policy. Following its second stint on the UN Security Council in 2015-2016,[10] New Zealand can now boast of a strong, principled foreign policy.

As New Zealand’s top diplomat, Gerard van Bohemen recently served on the UN Security Council.[11] He and his team are credited with having clear instructions from the Foreign Minister back in Wellington to make the most of the opportunity New Zealand had on the Council. They were not going to do what many other non-permanent members of the Security Council do and just follow the lead of the permanent members. Nor were they content to let the Permanent 3 dominate proceedings.[12] New Zealand had made promises to many small island nation states that they would represent their interests on the Council, and New Zealand followed through on that promise holding a high-level discussion and putting together a policy platform in the form of a publication that addressed the various concerns of the Small Island Developing States (SIDS), namely the negative effects of climate change and rising sea levels.[13]

The war in Syria was, as expected, the most important issue on the agenda on any given day. Working around the edges New Zealand proved that significant action can be taken. On New Zealand’s initiative resolutions were passed to allow humanitarian agencies to access besieged settlements and bring in extra supplies for the civilians trapped inside.[14] Another resolution asked that all sides in the fighting cease bombing hospitals and humanitarian camps.[15] Even though New Zealand has a small voice, it said what needs to be said. The late Russian ambassador, Vitaly Churkin, commented that he envied New Zealand’s geopolitical position far from any conflict zone. It has the benefit of being able to be frank in its conversations without the fear of angering people. He is right, sometimes the world needs someone to say what needs to be said which makes New Zealand’s foreign policy better for it.

The crowning achievement of New Zealand’s period on the Security Council was the last-minute passing of Resolution 2334,[16] originally tabled by Egypt, condemning Israel’s Settlements Programme as a “flagrant violation of international law” with “no legal validity”. New Zealand’s involvement was key. In the final hours before the vote was to take place, the original sponsor, Egypt, decided to withdraw its decision to table the resolution due to pressure from then US President-elect Donald Trump. Working with other non-permanent members of the Security Council, Malaysia, Senegal and Venezuela, New Zealand tabled the resolution on the 23rd of December 2016, pushing for an immediate vote. The resolution passed with a 14-0 vote – the United States abstained.[17]

The blowback from this resolution has not been insignificant. Netanyahu called this action by New Zealand as an “act of war”.[18] Such words only highlight the extreme nature of the current Israeli administration. Calling out New Zealand, an insignificant country at the bottom of the South Pacific, does not win you many friends. Israel has withdrawn its ambassador from New Zealand. Diplomatic ties are slowly being mended, but relations remain fragmented. Unperturbed, New Zealand does not regret its decision to table the resolution. Gerard Van Bohemen says that New Zealand’s foreign relations is built on using multilateral organisations such as the UN to create a rules-based system.[19] To do that, you have to actually believe in, and respect, that system. That is why New Zealand is not ashamed to call others out when they are in clear violation of the international rules.

Unlike other nations who face more difficult geopolitical situations New Zealand is an isolated nation at the bottom of the world with a population of just 4.75 million people. It has  no significant military presence, nor the economic power of China or the EU. The periods spent on the UN Security Council in 1993-1994 and 2015-2016 won New Zealand many friends in Africa and the Middle East. It has managed this by standing up and saying what needs to be said, and as a staunch defenders of a rules-based system. It is very hard to assess the tangible outcomes of New Zealand’s time on the UN Security Council, but if one thing could be said it is that New Zealand can truly be considered an independent international actor. New Zealand has stepped out from the shadow of its colonial past and subservience to US hegemony and in the past 30 years stuck to its own path.

The basis for this article is the result of the “Small State at a Big Table. New Zealand on the UN Security Council 2015-2016” held on the 16 May, 2017 at PISM in Warsaw. Much of the information therefore comes from the notes that I took that day and are paraphrased.  I have tried to accurately reflect what Gerard Van Bohemen had to say that day.

[1] The Australia and New Zealand Army Corps (ANZAC) was formed in 1914 at the outset of World War I. On the initiative of Churchill this Corps was deployed for the first time ever during the Gallipoli campaign and had the worst of the fighting. New Zealand and Australian troops had served previously in the Boar War in South Africa, but they served as British Colonial Troops.

[9] https://nzhistory.govt.nz/politics/nuclear-free-nz. For a famous debate on the nuclear issue held in Oxford between the Prime Minister of New Zealand David Lange and Rev. Jerry Falwell watch here: https://www.youtube.com/watch?v=sCZFPfe0LvA.

[12] The P3 in this context refers to the United States, France and Great Britain, who normally form a united policy front.