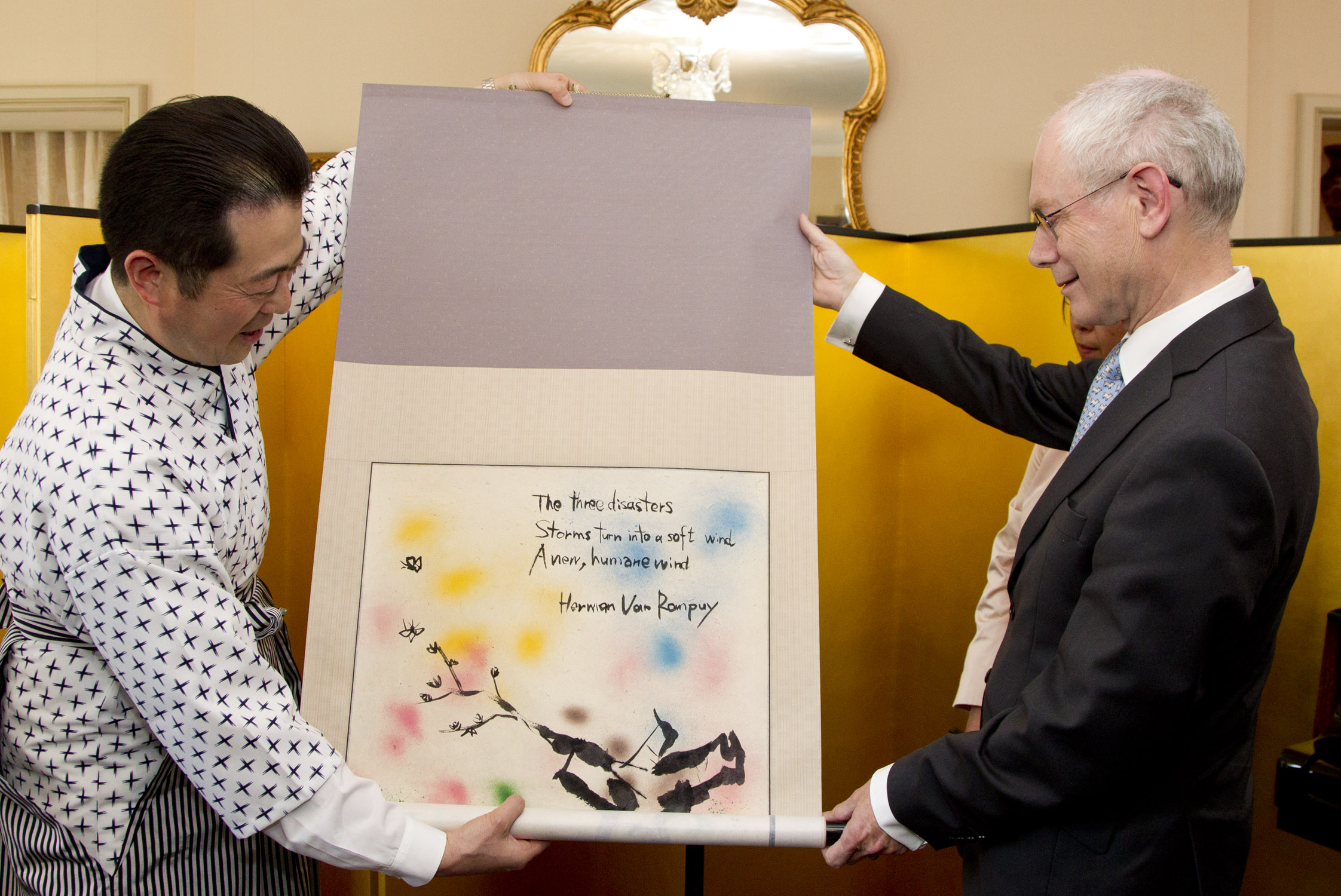 “A Haiku poet can in politics not be of an extravagant, idle or extremist nature.” [1] In a time where all three of those adjectives seem to have firmly established themselves in the political discourse, Herman Van Rompuy’s ‘seventeen syllable reflections’ do what one might expect from a seasoned politician: They show us where we have to go, but remain unclear on how to get there.

“I am sorry for saying something positive. These days you are only interesting if you say something gloomy”. During his presentation in a packed auditorium at the Natolin campus of the College of Europe the former President of the European Council touches upon a wide spectrum of political tensions, ranging from Brexit to the Refugee Crisis. In light of such difficulties and an ever-increasing dissatisfaction with politics, he thinks that the EU should strengthen its leadership while staying its course. It is only by showing results that we can counter popular resentment towards free trade agreements, closer association with our neighbors and deepening European integration, which he perceives to owe its widespread appeal to a group of demagogues and misinformation. Van Rompuy therefore proposes a different group to take the lead: “I like the word ‘moderate’. We need a revolution of the moderates. The sad thing is that moderates do not do revolutions”. Whether we look at the Brexit vote or the latest American elections, it is clear that moderation and continuity are not high on our societies’ contemporary wish list. How to solve this seeming incompatibility between the radical change desired and the moderation we arguably need?

A moment of reflection

Far away from lecture halls and political decision making, such questions seem to divide many a friend. This year even Christmas day celebrations were not able to prevent an increasingly tense discussion on the (dis)functioning of the European Union from crowding out all other conversations in the room. The main argument against any further European integration seemed to be based on a strong sense of what in Dutch is called ‘onmacht’, a feeling of powerlessness that makes peoples feel unable to influence their own lives. It resembles the feeling described in the last sentence of Van Rompuy’s haiku ‘A moment of reflection’: we feel everything spiraling out of control around us without knowing who is holding the reigns. The recent success of rightwing populism can at least partially be explained by its success in providing a discourse in which precisely those who are holding the reigns have been branded distant, abstract and self-interested. Immigration, terrorism and economic hardship are all supposed to be taken care of by an abstract entity we refer to as ‘Brussels’. This entity did not only fail to solve our problems, but is also preventing the much more tangible national authorities from assuming responsibility themselves. Such frustration has led to a popular demand for ‘less Europe’ while simultaneously stigmatizing those arguments that try to denounce this falsely assumed duality between the EU and its Member States as ‘elitist and condescending’. Understanding that people are angry has become a legitimate reason for pointing fingers in any preferred direction, especially towards those that seem to support elements of the current political establishment. One side regards the other as misinformed and manipulated, the other is branded elitist and unwilling to change. It is this mutual stigmatization from both sides that has made a necessary dialogue between those who want radical change and those adhering to moderation increasingly difficult. Anthony Downs’ theorem of the median voter [3], stipulating that any vote-seeking party will necessarily advocate moderation as it will want to get as close as possible to the voter in the middle, seems to have lost its predictive power in a political climate where polarization has created an increasingly marginalized center.

Back to our ‘former President turned poet’ and the difficulties of the current generation of European politicians in addressing such popular resentment. Is explaining the reality of the policy making process sufficient to persuade those that have given up on the ability of politicians to represent their interest? Is a stack of reports proofing the sectoral economic benefits of a trade agreement with the US enough to counter a widely-shared anger among the EU citizens in a majority of the Member States? It might very well be the opposite. As political journalist Susan Delacourt summarizes in her book ‘Shopping for votes’: treating voters merely as consumers instead of citizens is precisely what has led to widespread political apathy in the first place [4]. Part of the responsibility of the political enterprise and of the leadership that Van Rompuy advocates should therefore be to listen and engage with criticism, not merely wave it away as the result of people’s susceptibility to demagogy. Not because this demagogy is not there, but because ignoring such a large part of the electorate simply does not help us move forward. Instead of assuming that anger will disappear by simply ignoring it long enough, we could try to follow the advice of political scientist Paul Taggart: “Populism is best addressed by answering the questions it asks…”[5]. Instead, Van Rompuy’s comments on the newly elected US President clearly illustrate the opposite tendency in our leaders: he expects Trump to implements his program and fail because “reality will do its work”. The former President of the European Council even sees opportunities in the influence of Trumpian trade policy on EU-trade: “As the US stops free trade, we will continue, we will keep our course”. It is not very difficult to see how a dissatisfied European citizen might see such remarks as a lack of willingness to listen to popular dissatisfaction.

On our planet / there always is a sunny spot. / Still we stay put

The presentation from Herman Van Rompuy at the College of Europe left at least one student with a strange, ambiguous feeling. He did rather agree with the ideas of strengthening European integration and opening up to a global market, but simultaneously felt that this same vision will be impossible to achieve in a political context where the trust and mandate needed to realize such ideals cannot be guaranteed. The current wave of populism seems to be gaining speed without any sense of direction, where the old political elite seems to know where it wants to go but requires fuel that is no longer available. There is always a sunny spot, and perhaps we should look for it somewhere in between radical change and staying precisely where we are.

[4] Delacourt S., Shopping for votes: How politicians choose us and we choose them, D & M Publishers; 2016.