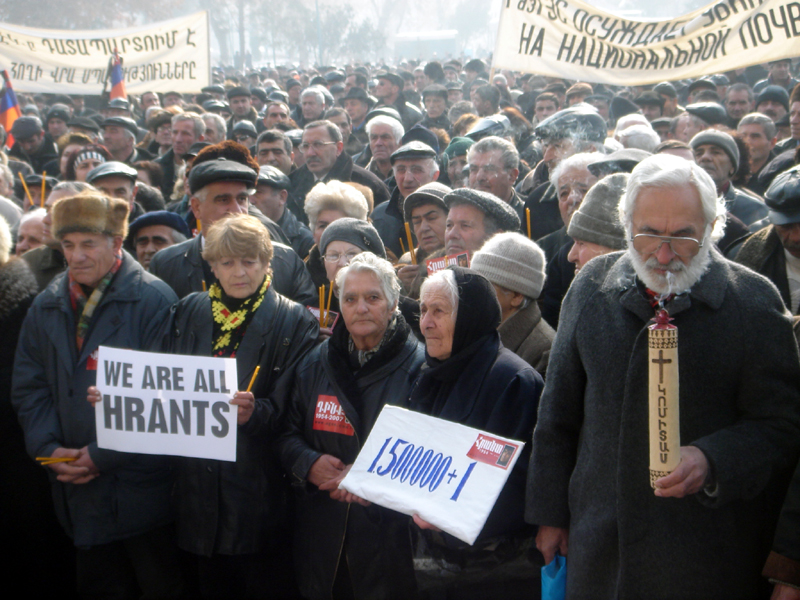 It was a cold Ankara morning and I was running late for school. I took the steep street going to the bus stop, checked my watch, and decided to make a run for it. I caught the bus at the last moment and went to the back seats, as is my wont. The fifteen-minute bus ride would take me to another bus stop where I would take the shuttle to university. I had a book in my hand titled 1915: The Armenian Genocide by Hasan Cemal, a Turkish dissident journalist and author. The book was just sitting on my lap as I was checking if I had my notebook with me. As I was doing this, I realized that the 60 or so year-old man sitting next to me was staring at the book. I felt unease and in my confusion felt the need to look at this older gentleman. At that moment, all I did was smile at him out of my discomfort. I finally found my notebook in the depths of my backpack and was opening the book when the man said ‘Do not believe this. It is all lies’.

My heart sank at that moment. Why did I have to put the book on my lap with its cover clearly visible? Why did I take so much time looking for my notebook? Should I answer him or just pretend I didn’t hear it? No, too late, I had already looked in his direction when he spoke.
‘It’s all Western propaganda. Nothing else. Turks would never do such a thing’, he continued. He wanted an answer. He craved an answer. He wanted to me to say ‘Yeah, I know it’s all lies. I’m just reading this to get to know the enemy, you know. Not a word of truth in it! Hasan Cemal is a veritable traitor!’

In any case, I was completely averse to the idea of engaging in a heated discussion with this man about the truth of the Armenian Genocide. So, I tried to take the easy way out, saying ‘This is for my university. I’m just trying to learn about different perspectives’.
I thought it had ended there, he would leave me alone. Instead, he said ‘Even if we did do it, we did well. They deserved it’.

I should have left my seat, gone to the front of the bus. I did not. I chose not to.
I am a Turkish citizen who came to realize the truth about the Armenian Genocide at quite a late age. The issue is virtually non-existent in Turkish history textbooks, in which the only mention of the events is about how Armenians formed illegal bands to rise against the Ottoman Empire during the Great War and that the Empire had to deport them to Syria, and, yes, some died on the way. That some is estimated to be 1.5 million people. This is an issue that Turkey and its people have to face and come to terms with.

In 2007, when Hrant Dink, in honour of whom the College of Europe named its 2007-2008 academic year, was killed on his way to the Agos newspaper, something unprecedented happened. Dink, who was critical of both the Turkish denial of the Genocide and the Armenian diaspora’s misplaced, he believed, efforts to have the Genocide internationally recognized caused one hundred thousand people, a great majority of them of no Armenian descent at all, to come together to protest at his assassination. His funeral service turned into a mass demonstration in which people chanted “We are all Hrant! We are all Armenians!”

When I think about Hrant Dink’s assassination, I am not only sad about the passing of this great man, disliked by both sides because he did not resort to their simplistic nationalistic rhetoric, but I am also sad that he was killed by a 17-year-old boy. How brainwashed he must have been to commit this horrible act and waste his life! Ogün Samast is now 26 years old and serving his prison sentence of 22 years and 10 months. He is filled with nothing but regret, and anger towards those who persuaded him to murder a man whose ideas he had not even known, whose books he had never read.

That is why I chose not to leave it there with the old man. I needed to speak. I needed to say “Not you and I, sir, but yes, the Turkish government in 1915 systematically killed 1.5 million people. Their own citizens. Now our government needs to apologize and we need to know that our ancestors committed this crime, and that nobody should deserve such a fate.” I said it loudly and clearly so that everybody could hear. Some people on the bus ignored me, some clearly disagreed.
I was happy to find, however, that some agreed with me.