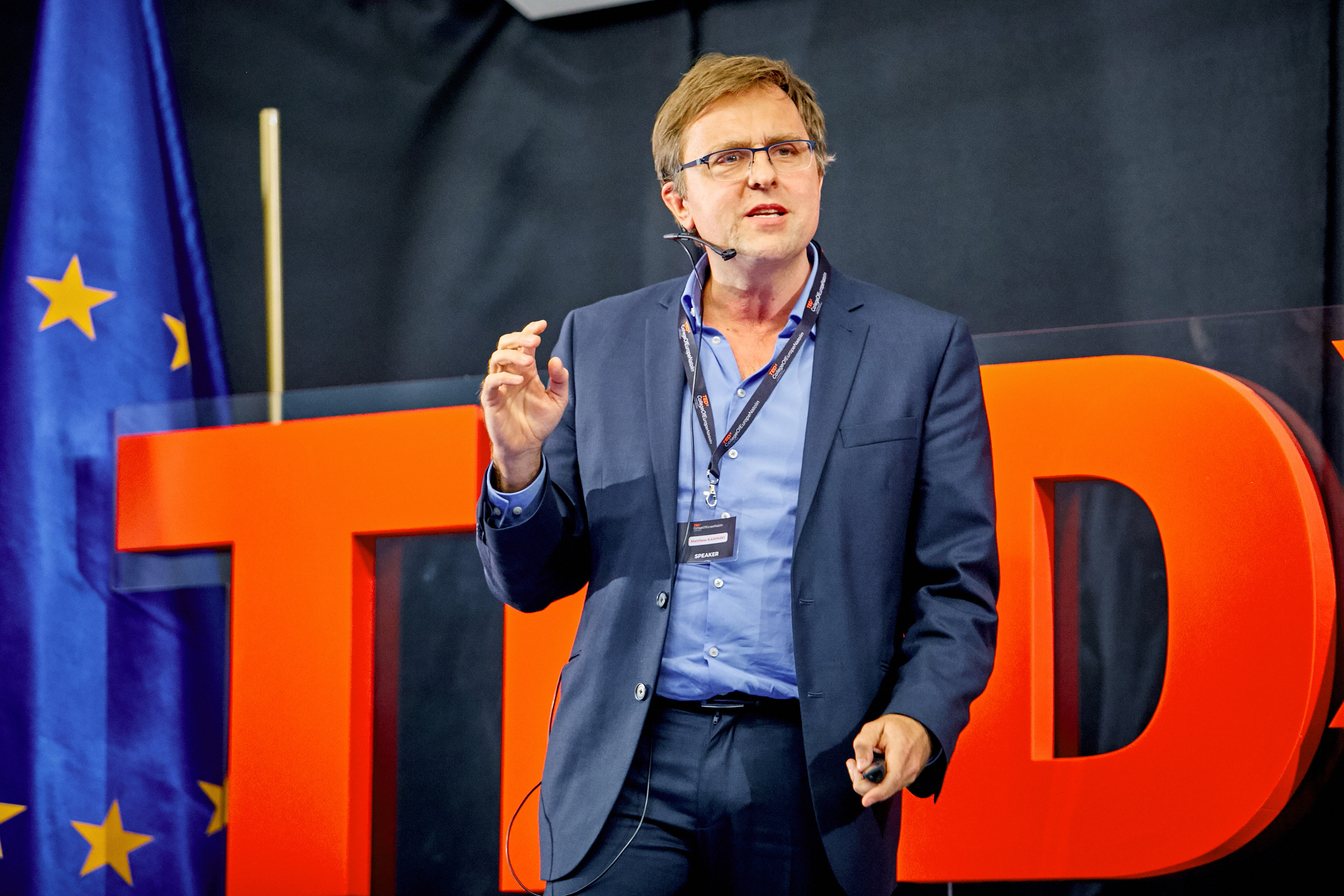 Matthew Kaminski will be a speaker during a TedX event organised at the Natolin Campus on 6 April. He is the director of Politico Europe, the news outlet that, since April 2015, has shaken the Brussels-based media landscape. “We keep in mind that Europe is an exciting political theatre, this is how we make it interesting for readers”. The author met him in Brussels in February, in the framework of his MA thesis research on pan-European media.

When entering Politico’s headquarters in rue de la Loi, only 400 meters away from the now tragically famous Maelbeek metro station, one gets the impression that journalism still matters. Coffee or tea are offered to guests sitting on comfortable sofas. Offices and newsrooms are beautifully designed in grey, red and white. The brand logo is constantly visible. Politico’s executive director Matthew Kaminski supervises 88 employees, 45 of whom form the editorial team. “Half of them are not native English speakers – he proudly underlines – they originate from several European countries”. Six of them, just to give an example, are Italian. Matthew Kaminski himself was born in Poland, and moved to the United States when he was 9 years old. “Politico is an American brand but, please, consider us a European medium. Our partner in the joint venture, Axel Springer, is a German publisher”. In January 2016, an annual ComRes/Burson-Marsteller survey ranked the European edition of Politico as the first publication most read by EU influencers. Politico.eu reaches between 1 million and 1.5 million unique visitors per month (source: Omniture), the weekly paper version is distributed freely in the Brussels arena, while Politico PRO is a policy news service for professionals who pay the subscription. “I am not overconfident about our future economic success – says Kaminski – but we need time and we multiply and diversify initiatives going in that direction”.

When asking around in Brussels, popular opinion follows two major trends. Paradoxically, Institutions are the happiest about Politico, “because it has shaken the media coverage of EU issues”, say officials from the European Commission. Competing media are a bit apprehensive about Politico’s financial means, some are upset about “Europolitics” collapse after Politico entered the arena, others still are suspicious about Politico’s “American methods” in searching for the scoop, which might not take into account the risk of not being accurate. Besides these polemics and criticisms that have been summarised by the influential blogger Jon Worth, Politico simply follows the line of saying things straight. “We try to respond to the changing habits of a particular set of people – says Kaminski – that we can call ‘influentials’ or ‘politicos’ and provide them with a content that they can’t live without. We do not need a mass audience: in order to succeed editorially and financially we need to capture that small group of people and provide them with the kind of stories that they cannot get anywhere else. Not only stories they have to read but [ones] they want to read, because there is a kind of fun, interesting and fresh content”.

The magazine that Politico acquired and replaced, “European Voice”, was considered too technical and dry. Politico seems to have been able to burst the Brussels bubble, trying to connect Brussels to European capitals through local correspondents. The focus is purely on power in Europe, rather than power or policies in the EU institutions. “Europe is much more than technical directives – he points out – There are clashes and fights for power day to day. And power is about people. EU institutions should be read in the same way as other political institutions. Even though Schuman and the founding fathers created a boring-by-design structure, they did it because this continent has been unstable for centuries. It has been the most interesting part of the world for one thousand years”. What are the reasons for which other pan-European media have failed to widen their public so far, and why Politico may succeed? “I think there has been too much consensual journalism so far. Our message is: ‘don’t let yourself be captured by the EU institutions!’ We are not an EU publication, we don’t serve their interest. The Commission may be gone one day, these are not eternal institutions, but we write about the eternal political theatre of this place, sometimes tragic as it is today, sometimes comic or inspirational”.