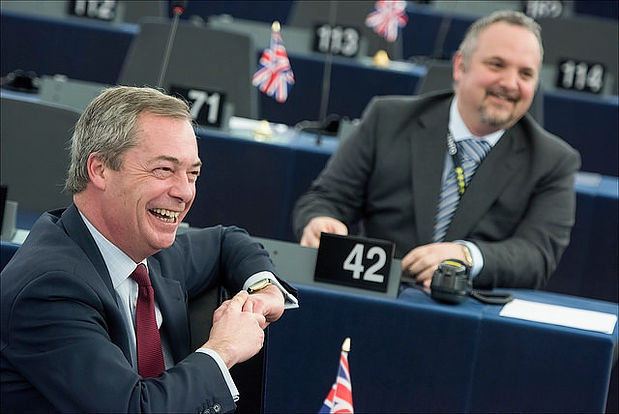 In the run-up to the Brexit referendum, the historic debate surrounding EEC (now EU) accession offers some instructive insights that can be used to deconstruct a crucial part of the English Eurosceptic narrative. The argument, as propagated by UKIP leader Nigel Farage, runs as follows: National elites disingenuously covered up the political implications of EEC membership, allowing them to dupe the public into renouncing the nation’s sovereignty in 1975. This is patently false. Indeed, the arguments on both sides were far more overtly political then than they are today. Where the campaign from fourty years ago incited us to think about the bigger geopolitical picture, today the “In” campaign focuses on theuninspiring, such as the marginal economic benefits of the status quo. This is worryingly reminiscent of the lacklustre “Better Together” campaign that almost unravelled the United Kingdom in 2014. Therefore, far from the 1975 “In” campaign having misled the public with a simplifying focus on economics, it did the opposite, while it is in fact today’s sterile pro-European arguments that should be accused of an overly technical and thus misleading focus. The aim here is thus to invert a key anti-EU narrative as expounded by British Eurosceptic-in-chief Nigel Farage.

Last year, Farage wrote an article on the EU referendum for the Daily Express, a tabloid whose logo features a crusader adorned with St. George’s Cross. It began:

In 1975 the public were told they were voting for a Common Market… Dressed up as being about trade and only trade, those who voted Yes in that particular referendum would never have envisaged the undemocratic monstrosity that the EU has grown into.

Unchallenged, Farage has been left to repeatedly present this line of thought on TV, in prominent public debates and in print, even though it has as much to do with historical reality as St George’s encounter with a dragon. Worryingly, this fictional account permeates British Eurosceptic thinking well beyond UKIP’s ranks. For instance, top Tory MEP Daniel Hannanmakes an almost identical argument. There is some meek opposition, though. For instance, Euro (and all-round) sceptic Peter Hitchens readily concedes Farage’s cherished point, pointing to contemporary sources.

Hitchens’ use of contemporary sources is instructive. Indeed, one such source is particularly useful in highlighting just how flawed the Eurosceptic narrative is: a 1967 BBC book on Britain’s second EEC application (prior to De Gaulle’s repeated “non”) adapted from a seven-part concomitant television series. The book’s preface states that “Audience appreciation for the series… included in this book was well above the average for comparable output on other subjects”. Referring to Britain’s first EEC application in 1961, the book explains: “The MacMillan government started by presenting the Common Market as an economic enterprise, but was forced as the debate went on to admit to its own broader political motivation”. In the intervening decade-and-a-half until the 1975 referendum, the political motivations of the EEC had thus been aired prominently and for quite some time.

This source further highlights the “credibility gap” –perceived on the continent, perhaps rightly– behind Britain’s desperation-fuelled application, and how it made for a particularly politically charged debate. One final example, found in the concluding segment of one of the episodes broadcast in February 1967 –and a chapter of the accompanying book–, helps hammer home just how political the British EEC debate was. Gavin McCrone concluded his contribution by stating unequivocally: “The ultimate aims of the Community are political as well as economic… We therefore have to decide whether we want to be part of a United Europe or not”, before drawing an explicit analogy between the very formation of the United Kingdom and accession to the EEC. Who would dare speak in such terms today?

Despite this reality, the November Criminals-style narrative of the Eurosceptics endures. Farage most clearly expounded his stab in the back myth through a document produced under the auspices of his co-presidency of a now-defunct hodgepodge European Parliament grouping. Perhaps fittingly –as the political heir to Enoch Powell and suspected longstanding racist– Farage shared the co-presidency with a fan of the Norwegian white supremacist and mass murderer Anders Breivik. In his document, Farage argues as follows:

The original 1957 Treaty of Rome explicitly commits signatories to “ever closer union”. But this was a line carefully excluded from the British Government’s pro-EC membership propaganda. Instead they tried to pretend that sovereignty was being enhanced rather than abrogated: “…we are asking you to vote in favour of remaining in the Community… [T]he prime minister declares that through membership of the Market we are better able to advance and protect our national interests. This is the essence of sovereignty”.

Farage goes on to conclude from this that “the British establishment lied” so that the outcome of the 1975 vote “was a majority gained by fraud”, going so far as to equate the vote with the rigged “plebiscites” utilised by the Nazis. As leader of the one-man band that is UKIP, Farage’s views influence and represent a sizeable chunk of the British Eurosceptic movement.

The above interpretation of course begs the question: Why on earth would Britain’s leadership think it a good idea to voluntarily surrender national sovereignty and with it their own power? Farage offers no answers, and the UK government’s explanation that, through Europe, Britain is “better able to advance and protect [its] national interests [which] is the essence of sovereignty”, is correct. This is the logic that took the entire European integration project from a pre-WW1 and interwar utopian pipedream to an empirical post-WW2 reality. European states were “reborn as puny weaklings into the postwar world”, as Alan Milward put it, providing an incentive to establish institutions transcending the nation-state. Western European states thus traded some de jure sovereignty (the exclusive right to define law and policy in certain areas) for greater de facto sovereignty (the actual ability to steer the nation’s destiny). This has to be the logical starting point of any discussion on why states would “give up their sovereignty”.

A fully sovereign (in Farage’s de jure sense) Luxembourg would be within its rights to sign a series of fanciful laws declaring, for instance, the creation of an independent space programme. Yet, it is unlikely that such a country would have the de facto ability to carry out these ambitions without first pooling its de jure sovereignty with a larger political entity. In this way, Britain’s public and elites alike decided that national sovereignty, properly understood, would be enhanced through EEC membership.

This understanding explains why, for example, the de facto constrained Benelux states have long been disproportionately active in integrationist efforts, or why post-communist East European states were so eager to join the EU immediately after having shaken the yoke of Soviet imperialism. Accordingly, Britain’s U-turn towards the continent stemmed from how relatively puny it was getting as a result of its exclusion from the EEC in the first place, despite having already set up an organisation based on “trade and only trade”: EFTA. It was Britain’s large geopolitical appetite –linked to its colonial history, global superpower status and post-WW2 pride– that fuelled its desire to maintain some economic weight in the world by joining the EEC. Yet, today, it is ironically those with the greatest imperial nostalgia who most fervently push for Britain to undercut its own ability to influence the world by abandoning the EU.

The above conception of sovereignty also explains Britain’s peripheral status within the EU, which arises precisely from a (predominantly English) sense of having both unique national aims and the unilateral ability to pursue them. Even Commission President Jean-Claude Juncker seems to concede the latter point. It also further helps us to understand Britain’s obsession with the “ever closer union” clause, a top priority in EU negotiations, which was ironically entrenched in Maastricht only upon British insistence, in a compromise made to exclude any explicit mention of the F word.

By brutishly flattening the multi-dimensional picture of sovereignty into a zero-sum game, Farage is able to evade the realities of Britain’s diminishing global power status. Instead, Eurosceptics have been left free to explain this waning importance by concocting conspiracy theories of British independence being sold down the river by greedy politicians for unspecified reasons. This outlook ends up feeding into official government policy and –more worryingly in the run-up to the referendum– establishes a negative national stance on the value of continued participation in Europe. This is why it is so crucial to engage Eurosceptics not on petty details such as the marginal economic effects of membership, but on the core principles behind the European debate, including sovereignty. As things stand, this ground has been willingly surrendered to the “Out” campaign’s mythologising tactics that portray a betrayed Britain. If we are to avoid a re-run of the dismal Scottish campaign of 2014 and replicate the last-minute swings in favour of Europe from 1975, the “In” campaign must concentrate less on what Britain would be impotent to do without Europe and more on all that is made possible within Europe. We must counter the modern day Eurosceptic tale of St George with an equally enthusing narrative built on facts instead of mythology.