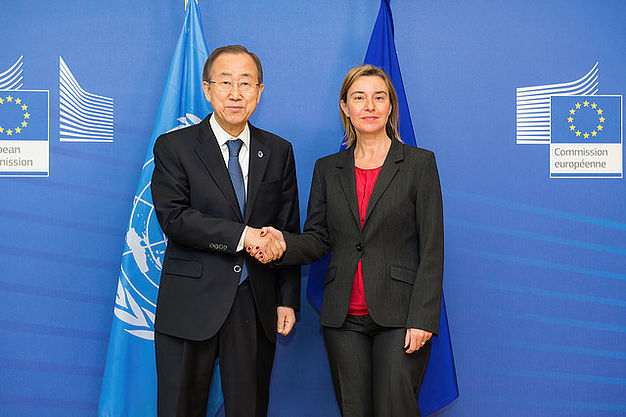 The European Union and the United Nations are two of the most talked about actors on the world stage, and their cooperation and interaction are bound to have an impact on the issues at stake. By being present at the UN, the European Union has the opportunity to make its voice heard and have an influence on debates and decision-making on the world stage. This is crucial for today’s Europe, which is questioning its role in an ever more globalised and interconnected world, in which it is relatively small.

European policy towards the UN dates back to the Lisbon Treaty (for ex: the Millennium Development Goals proposed by the UN). Its issues include global security promotion, peace maintenance, climate change policy and more. The Iraq war scenario, in which the European front faced a major crisis and quickly fell apart amid childish accusations from both sides, did the EU’s image a great deal of harm.

Before the Lisbon Treaty, there was no fully fledged cohesive coordination between the EU and the UN as the former was merely perceived on the UN arena more as a regional organisation, and only had the status of a simple observer. Nevertheless, it should be emphasised that the vagueness of its legal status did not hold back the EU from achieving a relatively high level of legitimacy within the UN.

Like EU-UN coordination, EU representation at the UN before the Lisbon Treaty entered into effect encountered a certain number of obstacles as the EU could not speak with one voice, and thus struggled to be represented as a single entity. It was expected EU representatives would be more loyal to EU interests rather than to individual ones. This turned out not to be true as some EU member states took this opportunity to defend their individual interests within the UN bodies.

The most famous (or infamous?) illustration or what can happen when European countries fail to find a common position for the EU to uphold is the disastrous Iraq war crisis. The split between the two Security Council members, France and the UK shocked outside observers and caused heavy friction within the EU. The EU does have coordination mechanisms in place between its members, but they failed, and such was the friction caused that the Iraq War went ahead without Security Council approval, which rendered it illegal in the eyes of some. A common European position on what should be done about Saddam Hussein’s Iraq in the framework of the Common Foreign and Security Policy (CFSP) was seriously lacking, and an arena was created in which European states were pitted against each other, each defending their own visions and interests.

In order to avoid these crises from becoming a regular occurrence in the European presence at the UN, the Member States needed to work on their cohesiveness and coordination in finding a common position so as to speak as a single voice and actor. The Treaty of Lisbon redefined and strengthened actions taken at international level in general and UN level in particular.
The Lisbon Treaty granted the EU a single legal personality in article 47 TEU. This is significant, because thanks to this Treaty, the EU gained the power to sign contracts, be part of international conventions, negotiate international agreements and sign treaties on behalf of all the EU member states. However, the work is not finished, and some obstacles to the cooperation between the EU and the UN still remain, even after the entry into force of the Lisbon Treaty.

In the post-Lisbon era, the UN adopted resolution A/65/276 upgrading the status of the EU. It allows EU representatives to represent the EU, speak with one voice to present common positions of the Union, to participate in the General Assembly, have communications related to the UNGA sessions and meetings, present proposals and amendments, reply regarding positions of the EU, and make interventions. All of this is evidence that EU delegations in the UN have become more coherent in the post-Lisbon era. They represent all Member States’ common positions and speak at the UN, they do so cohesively and with one voice.

All in all, the Treaty of Lisbon only marginally affected the EU’s cohesiveness and influence in the United Nations. Some problems which result in such weak effective representation are: internal disagreement between Member States and the EU, the distorted division of powers between the EU and its member states (in terms of the right to negotiate international agreements), the variation of statutes that the EU possesses in the UN forums (observer status, enhanced participation right, a member organisation – to name three). If the EU wishes to use the platform of the UN to make its voice heard on the international stage, it will have to overcome the obstacles outlined in this article.