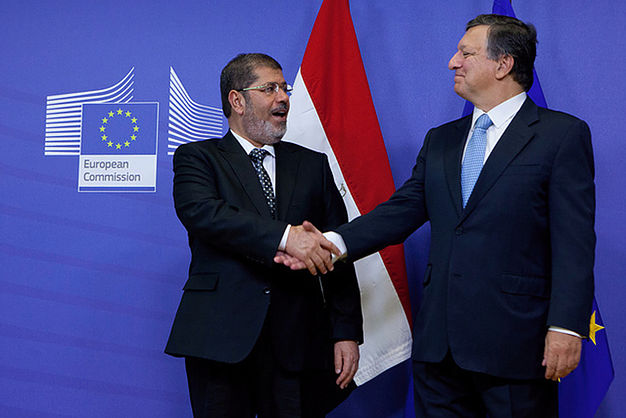 After the outbreak of the Arab Spring in Egypt in 2011, when demonstrations called for the resignation of President Mubarak and for the celebration of free elections, the diplomatic relations between Egypt and the EU were subject to a considerable change. This cooperation, formerly based on stability and economic cooperation, was now to be based on liberal values. Can the EU’s response to the Arab Uprising in Egypt be deemed as effective?

Shortly after the outbreak of the Arab Uprising in Egypt, the EU High Representative Catherine Ashton held a speech in the European Parliament giving remarks on the events, noting the legitimate aspirations of the Egyptian people and claiming her support for a peaceful, democratic change. She demanded the Egyptian authorities to stop violent assaults on demonstrators and to head further to negotiations. On the same day, the European Commission released a Memo calling for free and fair elections in order to establish a democracy based on liberal values. The Memo also mentioned that the cooperation between the EU and Egypt fixed by the ENP ought to be based on these values. Together with the newly articulated “Partnership for Democracy and Shared Prosperity”, the European Council promised assistance for the transition. Within this framework, specific allocations for funds such as the tourism, agriculture, and energy sectors were detected to stipulate economic growth.

After the rise of the Muslim Brotherhood‘s party “Freedom and Justice” as well as the election of Mohammed Morsi in June 2012 as the first freely elected President of Egypt, tensions started again to erupt. In early 2013, violent clashes between the new government and the group of young protesters, which feared to lose its previous liberal achievements to an Islamic dominated regime, caused new declarations of concern from the European Union. Finally, the Egyptian military intervened, toppled the President and successfully portrayed itself as the saviour of the people.

However, despite the adoption of a new Constitution in 2014, which provides liberal precepts and guarantees the protection of human rights, individual freedoms and gender equality, these provisions have not been appropriately applied. Freedom of assembly was jeopardized as a consequence of the 2013 ‘protest law’. In this respect, the Rabaa massacre with around 1,000 killed protesters forms the new sad climax and illustrates the repression from the new military rule. Media and freedom of the press were also targeted by the Egyptian authorities. Treatment of human rights and fundamental freedoms do not offer a brighter picture either – cases of torture and forced disappearances in state facilities were reported, as well as cases of sexual violence against women, even committed by the police. Collectives such as the LGBT were persecuted under the pretext of debauchery. Yet, it seems as though the compliance with the criteria of the promotion of values propagated by the EU do not seem to be a condition sine qua non for the development of satisfactory relations in areas such as trade or fight against terrorism. Cooperation of the EU with Egypt has been happening irrespective of the lack of implementation of the values that inspired the new partnership so that it seems now more than ever obvious that stability prevails over democracy.

The EU was surprised and unprepared for the events in Egypt from the moment the Arab Spring started. Its reactions to the uprising were ‘strikingly slow, divided and incoherent’. However, it would be unjust not to notice EU financial aid and political support in the period following the Arab Spring, which positively influenced some of the developments in Egypt, for example the successful holding of elections. Scholars have argued that the EU policies towards MENA countries, including Egypt, did not witness significant changes post-Arab Spring. Even if the EU allocated a significant sum of money into the post-revolutionary set of reforms, it is important to remember that money is not everything. In order to introduce real change, it should be crucial from the EU side to present a unified position, develop a strategic approach, use efficient tools and stick to its normative principles. But while the Euro-Egyptian ties intensify again, it seems that it is once more upon the Egyptian people to rebel against the repression in their country in order to provoke a new change in the European mind-set…