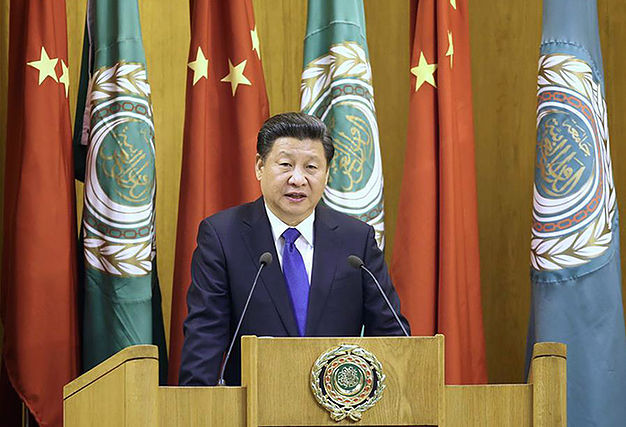 Last January, during his first official visit to Egypt since being elected as China’s President, Xi Jinping made clear that his country is an emerging power in the region. Many experts perceive the visit not only as a remarkable new stage in the Chinese-Egyptian relations, but also as a starting point of China’s prominent engagement in Arab political and economic affairs.

In his speech on the 21st of January at the Arab League in Cairo, Xi outlined China’s future strategy toward and perspectives for cooperation with Arab countries as well as Africa. Although his speech touched upon serious political issues including fighting terrorism, conflict resolution and UN reforms. The Silk Road Initiative (SRI) or “One Belt, One Road” project was the main theme of his discourse, as he expressed China’s keenness to involve Arab countries, especially Egypt and the Gulf Cooperation Council (GCC), in this project via a five-year strategic partnership.

Before discussing the SRI, he began with the Palestinian – Israeli conflict (which could be called be the “forgotten” conflict these days due to the volatile conflict in Syria). The Chinese President called on the international community to regenerate the peace process between both sides, affirming China’s support to the Palestinian demand of having its sovereign state on the basis of the 1967 borders with East Jerusalem as its capital. Moving on to the Syrian conflict, Xi declared his country’s intention to provide 35 million dollars for humanitarian assistance to the people of Syria, Jordan, Lebanon, Libya and Yemen, saying that “there will be no winner out of the conflict, and it is the people in the region who are suffering.”

More important than China’s pure political interests, are its economic accomplishments in Arab countries. China has already initiated the (1+2+3) formula for a strategic partnership, in which China has committed itself to export technical experience in fields such as energy and infrastructure and to promote trade and investments in the Arab states, bearing in mind that the Gulf countries are the largest suppliers of oil to China. Therefore, Xi announced that two funds set up with the Emirates and Qatar, totalling 20 billion dollars will be lunched in order to boost investments and advanced industries in the region in addition to the new financial windows offered by the Sinosure, China Exim Bank, and China Development Bank. Furthermore, China will offer 15 billion dollars in commercial loans to co-fund production intensive industries.

At the same time, the Chinese President connected China’s economic interests with the recognition of the highly developed state of Arab civilization. The year 2015 also represented the Chinese-Arab year of friendship, during which several high-level visits between Chinese and Arab academics, civil servants and business associations took place. He announced the foundation of a Chinese-Arabic Center for Reform and Development that will organize roundtable discussions with a hundred Arab and Chinese public figures to promote a culture of dialogue and raise mutual awareness of both cultures.

Xi also announced the launch of “Smell of Books in the Silk Road” initiative as a means of relating cultural cooperation between China and the Arab world with the SRI. This initiative will encourage mutual visits between Arab and Chinese academics and offer training for around one thousand young Arabs and 1,500 members of political parties.

As the second largest economy worldwide, China endorses the SRI to meet an increasing demand for trade and pave the way for its foreign direct investment in the Middle East and Africa. Therefore, China’s recent active role in the Arab world is obviously linked to its priorities for the Silk Road Economic Belt.

The Chinese government applies a “comparative advantage” approach to the seven Arab countries which agreed to join the SRI. For instance, it has offered Free Trade Area Agreements with the oil-supplying countries to secure its energy resources, the material basis for the whole project. In Egypt, for example, the Chinese government has already funded several projects in the railway, energy and electricity sectors to enhance its industrial baseline and capacities especially in the Suez Canal Industrial Zone.

Acknowledging the necessity for major funds for the SRI and its economic agreements with the Arab countries and other countries like Turkey and Iran, the China-led Asian Infrastructure Investment Bank (AIIB), is another step forward for China as a major player in the global economy. The AIIB will have a significant role in approaching China with the Arab world, considering that Egypt and the GCC are amongst its founding members. The bank will offer them 10-15 billion dollars to support five main sectors: energy, transportation, rural and urban development and logistic services.

A five-year strategic partnership framework between China and Egypt was signed during this visit. It will favor further political, economic and security cooperation between both countries. The agreement devotes both countries to ongoing consultations and exchanges of views concerning current political issues, such as fighting terrorism. In addition, China will support enhancement of the Egyptian financial sector; provide capacity building training for two thousand Egyptian civil servants and workers between 2016 and 2020, provide Egypt with a cyber security system and establish a Chinese-Egyptian center for renewable energy.

The SRI was also included in this agreement, as Egypt is dedicated to supporting China’s efforts to accomplish the initiative successfully while China will increase funds for development projects given priority by the Egyptian government. During his visit, the Chinese president inaugurated the second phase of the Suez Canal Corridor Project as it is one of the most promising economic zones and is expected to offer approximately 10,000 new job opportunities. China has also chosen Cairo Airport as a hub for China’s airlines to facilitate its links with African countries.

It appears thus that we are in a new era of Chinese-Arab economic and political closeness, based on mutual interests and China’s pragmatic approach to softly engage in the region. Xi Jinping smartly used his rhetoric in the Arab League to affirm that his country doesn’t look at having a “hegemonic position” or “filling the gap” that other international actors have left open. It would seem that the voice of China is and will be more acceptable in the Arab world than other foreign voices, especially with the long-lasting legacy of external interventions in this region.