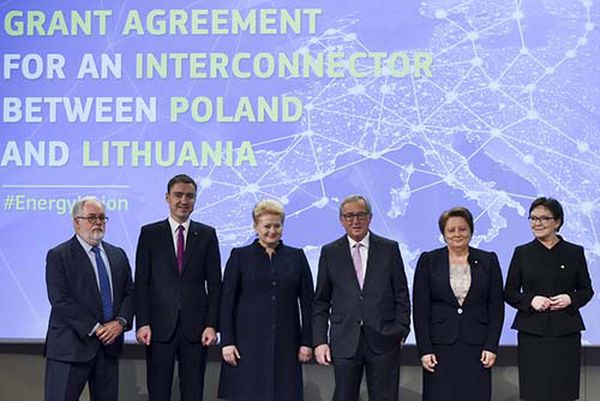 The Baltic States have often been described as an “Energy island” because of their isolation from European energy networks. Until very recently, the three states were, together with Finland, 100 % dependent on gas imports from Russia as can be seen in the table below.

Figure 1: Gas supplied by Russia as percentage of the total gas imports in the EU.

However, since 2012 the situation has changed. The reasons for this transition can been traced back to the fears concerning the insecurity of the supply of Russian gas, especially after the Russo-Ukrainian “gas wars” in 2006 and 2009. The annexation of Crimea by Russia in 2014 only emphasized the conviction that the development of energy infrastructure and networks is a matter of utmost importance for the Baltic States.

The EU energy strategy towards the Baltic region

This concern is also shared by the European Union. Under the new Trans-European Networks strategy the EU identified the Baltic region as a priority. The policy is a part of one of the five 2020 Energy Strategy goals to build a pan-European energy market.
The Baltic Energy Market Interconnection Plan (BEMIP) is a Project of Common Interest(PCI) which aims to end the isolation of the Baltic States by creating an integrated energy market in the region.

The strategy calls for competitive and fully functioning regional gas and electricity markets, market integration, construction of necessary infrastructure, and synchronization of the Baltic States with the continental European network. This initiative will ensure that the Baltic States will be better connected with the EU energy market and thus less dependent on Russia

The search for better interconnectedness of supply has been directed both to the south and to the north of the Baltic region. In the case of Lithuania a natural partner has been Poland. The Agreement on financing the construction of gas connection between Poland and Lithuania (GIPL) was signed in October 2015 in Brussels. The project, which has received a PCI status, will allow the connection of the Baltic States to the EU gas market.
The pipeline is expected to be built by 2019, freeing Baltic States from isolation from gas connection only with Russia.

Estonia leans strongly on highly polluting oil shale in its electricity generation. Therefore the electricity interconnectedness with Finland, aiming to deepen the electricity market integration between the two countries, can be seen as a positive development. The first submarine electricity cable across the Gulf of Finland, Estlink 1, was inaugurated in 2006, followed by the completion of Estlink 2 in 2014. Similar submarine power cable project, NordBalt, is currently under construction between Sweden and Lithuania.

LNG terminals as a way to diversify gas supply

Besides integrating the energy networks to other parts of Europe, the Baltic States have embarked on building Liquefied Natural Gas (LNG) terminals to import gas from overseas. The LNG terminal in the Lithuanian port town of Klaipeda, completed in 2014, was the first such project. The construction of the LNG terminal improved Lithuania’s bargaining position vis-à-vis Gazprom. As a result, the price of Russian gas dropped by more than 20%.

Finland and Estonia have also been negotiating on building a regional LNG terminal in one of the two countries. In October 2014, a decision was taken to build the larger regional terminal in Finland and a smaller terminal mainly for gas distribution in Estonia. According to the agreement, the terminals and the pipeline connecting them should be completed by 2019, but the project is still pending on the acquisition of PCI funding from the European Commission.

The above examples of the efforts to increase the security of energy supply show that the Baltic States are determined to decrease their energy dependence from Russia. They reflect also the convergence of the energy policies of the Baltic States with the wider EU energy strategy. This can be regarded as a significant change compared to the previous situation when the Baltic States and Poland fiercely criticized projects such as the Nord Stream which linked Russia directly with Central Europe, thus bypassing the Baltic States.  In the wake of the gas disputes with Russia and the ongoing conflict in Ukraine the energy security of the Baltic region has become a priority for the EU as a whole in an era of deepening confrontation with Russia, especially in light of the ongoing conflict in Ukraine.

However, Russia will remain an important partner of the EU in gas supplies for many years to come. As gas occupies an important role in the energy transition pursued by the Union as a “less polluting” option to other fossil fuels, EU continues to remain heavily on affordable gas imports from Russia for decades. Russia has also its interests on stake, as a lion share of its gas exports are sold to the EU market.

The Baltic States, known to have icy relations with their Eastern neighbor, will surely search to decrease further their dependency on Russia as much as possible in the future. The above mentioned projects and the flirtation with building a new nuclear plant in Lithuania are cases in point. The aim to assert energy independence from Russia is so strong that geopolitical considerations sometimes override questions of environment and sustainability.

In any case, changes in the geopolitical situation have contributed to that that the energy isolation of the Baltic States has been taken seriously on the EU level. We expect the that these kind of projects will continue to be advocated by the Baltic States and supported by EU funds.