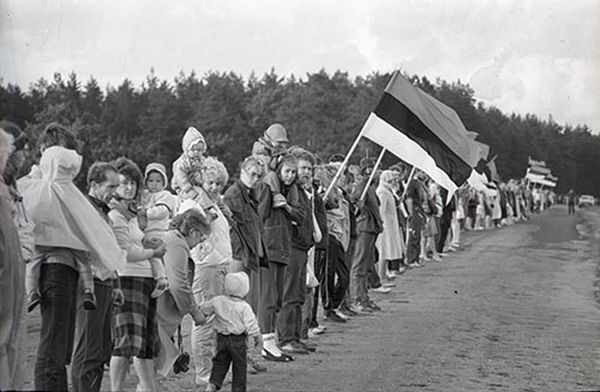 Twenty-six kilometres north of Vilnius lies the geographical centre of Europe. Twenty-six years ago, it was calculated by the French Institut Géographique National. The Lithuanian Soviet Socialist Republic still existed. Perhaps, in 1989, when about two million Estonians, Latvians and Lithuanians linked hands, forming the Baltic Way to mark the fiftieth anniversary of the Nazi-Soviet pact on 23 August, the centre of Europe was also its heart.

As the organ which pumps blood through the human body, the heart is off-centre. As a metaphor for the feelings, it has no fixed abode. The poetic concept of the Heart of Europe was claimed for Poland by the bards and seconded by Norman Davies. And perhaps, on 4 June 1989 the heart of Europe was in Poland, when Solidarność (Solidarity) crushed the Communists in partially free elections.

The claim to be the centre of Europe is ultimately as subjective as the claim to be the heart. Europe – the western end of the Eurasian landmass – is a construction of human geography. Its frontiers are not determined by tectonic plates. ‘Europe’ only took shape towards the end of the first Christian millennium, and only generally replaced ‘Christendom’ during the seventeenth century. Some now use ‘Europe’ as a synonym for the EU.

The lands usually considered the economic and political centre, or to adopt the bodily metaphor, the pumping heart of Europe – between Amsterdam, London, Paris and Frankfurt – were at the margins of Greco-Roman civilization. Even Charlemagne’s renewed Western Roman Empire (whose territory approximates to the six original members of the EEC) was outshone by the civilizations of the East.

Most of East-Central Europe, including Poland, became part of European Christendom shortly before AD 1000. The Lithuanian heartlands joined four centuries later. With the lengthy exception of the three centuries between 1350 and 1650, Lithuania and Poland have more often than not found themselves at Europe’s margins – if these are judged by the criteria of wealth, power and prestige.

But what if our criteria for ‘the heart of Europe’ are freedom, and the aspiration to freedom?The Polish-Lithuanian Commonwealth was founded on principles such as nic o nas bez nas– best translated as ‘nothing concerning us without our participation.’ It assured its citizens freedom from imprisonment without trial, freedom of religion and freedom of expression. These individual liberties rested on political liberty: citizens’ active involvement in their own governance.
In the 1790s Russia, Austria and Prussia dismembered a Commonwealth which – after a period of crisis – was again moving towards orderly freedom. A freedom extended by degrees to all its inhabitants. For most of the nineteenth century, a Romantic vision of the lost Commonwealth inspired Polish and Lithuanian patriots to fight not only for their own, but for others’ freedom too. According to poets such as Juliusz Słowacki, here was the heart of revolutionary Europe.

At the end of the nineteenth century, the consensual traditions of the Commonwealth were rejected by modern Lithuanian and Polish nation-builders. And yet when restored after the First World War, both Lithuania and Poland achieved much. They reduced the civilizational distance to Europe’s pumping heart. Great improvements were made in industry, communications, health and literacy. These achievements were founded on public-spirited patriotism. Despite the failure of parliamentary democracy, neither state became a fascist tyranny.

Moscow, 23 August 1939… Stalin was smiling as another partition of East-Central Europe was signed. This time between the Soviet Union and Nazi Germany. For the next six years, what Tim Snyder has called Europe’s Bloodlands, including Poland and Lithuania, become Europe’s bleeding heart. Once-mighty Europe is humbled and ruined.

As the Iron Curtain falls, Lithuanians are re-incarcerated in the Soviet Union. Poles are allowed a satellite regime. From a Western perspective, these are distant margins indeed. But from those oppressed and impoverished margins, the love of freedom stirs. The spirit of Solidarność catalyses the fall of the Communist satellite regimes. The spirit of Sajūdis catalyses the fall of the Soviet Union itself.

Have the margins of Europe become the heart? Perhaps, for a poetic moment, yes. After the euphoria, the extent of the necessary reconstruction becomes clear. The 2004 entry into the EU of Lithuania and Poland is achieved by foresight, determination, hard work, and consensus. And by the unconditional acceptance of current frontiers, while agreeing to differ about the past. The Natolin Campus of the College of Europe was created in 1993 thanks to the efforts of far-sighted Poles, eager to return to the heart of Europe.

Today Lithuania and Poland are far from the margins of Europe. They belong both to NATO and to an exclusive EU club which is not encouraging new applications for membership. Living conditions are a world apart from those in Donbas or Transnistria.. Lithuania and Poland are little affected by terrorism, or the great migration of refugees. They seem unlikely to follow Greece into financial meltdown. Perhaps the safest place in Europe is neither at its pumping heart, nor its margins, but somewhere in between?
The Polish and Lithuanian poet Adam Mickiewicz would not have been impressed by such reasoning. His diatribe, Romantyczność, against the blindness of scientific knowledge, can also be read as a warning against leaving government to technocrats, and as a call to trust the hearts of the people:

You understand dead truths beyond the wit of common folk;
You can see the world in a grain of powder, in every spark of the heavens.
But living truths escape you; you do not see the miracle!
So take courage, and look into people’s hearts!**

The centre of Europe twenty-six kilometres north of Vilnius – that’s what Mickiewicz would have called a dead truth. The solidarity of millions of people, linking hands for freedom – that should be the heart of Europe.

This article is based on a lecture delivered on 17 September 2015 to the conference The Dynamics of Lithuanian-Polish Relations: Cooperation in the EU, held at Vytautas Magnus University, Kaunas, Lithuania. The full version can be accessed here.