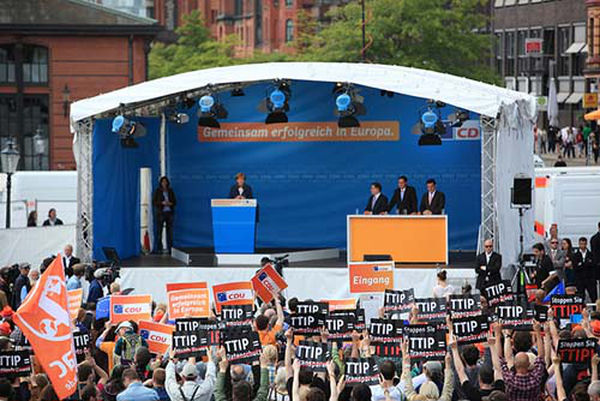 “I do not take my mandate from the European people” this is what the Trade Commissioner said to John Hilary in a recent interview published by The Independent on the 13th October 2015 with the title I didn’t think TTIP could get any scarier, but then I spoke to the EU official in charge of it.

The democratic deficit is one of the biggest issues of the negotiations about the Transatlantic Trade and Investment Partnership between the European Union and the United States of America. More than 3.5 million European citizens have signed an online petition against the TTIP, and all over Europe many protests have been held in several countries and cities.

On the one hand, trade theories show us that the liberalisation of trade has positive effects on economies, as it is also stated on the European Commission website. On the other hand, the economic aspects on their own are not sufficient to take such decision. Many other political issues should be taken into consideration while negotiating this agreement.

The EU and US have, for example, different provisions in terms of health, food safety and environmental standards. For instance, the EU is strongly committed to the reduction of carbon emissions through the EU Emission Trading System (ETS), which applies to several industrial sectors. This system pushes European industries to cut their emissions through a “cap and trade” principle: those industries whose emissions are over the cap have to buy emission rights from those industries whose emissions are less than the cap, assuring in this way a “polluters pay” system. On the contrary, US industries do not have this problem, since the US never signed the Kyoto Protocol. Under the TTIP framework, American industries would be more competitive against European ones since they would not have to comply with the same environmental limitations.

Taking food safety as an example of the dangers ahead, the EU and US have already had a dispute regarding GMOs in the WTO in 2006. The Dispute Settlement Body has sanctioned the EU for the ban of GMOs, and the sentence was confirmed in 2012. A similar mechanism is expected to be included in the TTIP agreements: any investor could sue any sovereign state whose policies are not in favour of investor’s interests in front of ad-hoc courts. Which interests is the TTIP really in favour of? If the aim of the WTO judgement is to ensure companies’ rights to equal conditions of competition, it does not take into account citizens’ rights: these are sacrificed in the name of Neoliberalism, in a biased vision where economic growth is at its core.

The European Communities has, throughout its history, spent a huge part of  its budget in the Common Agricultural Policy (CAP). The TTIP also concerns agricultural markets and the European Parliament already included these risks in a study dated 2014.It stated that “a potential EU-US trade agreement may create some serious imbalances in particular EU agricultural markets where the current EU tariff protection is high and where US production has a cost advantage”. Some agricultural products of excellence, such as oil, wine or cheese from the EU Mediterranean countries will be at risk, due to the strong competition of US products and the fact that they do not have to respect the same quality standards as the European products.

Many other sectors are concerned by this agreement: chemical, cosmetics, engineering, pharmaceuticals, information and communication, textile, cars, energy and intellectual property are some of the most important ones. The TTIP has also created disagreement inside the American Democratic Party, with some of the democrats joining their forces with republicans against Obama’s administration. Divisions happened also inside the European Parliament: for example, the Socialists and Democrats (S&D) group of the European Parliament divided itself, as the last vote in European Parliament has shown. Part of the group voted against the resolution of the 8th July 2015, which contained recommendations for the negotiators on the TTIP, for disagreements on the investor-state dispute settlement (ISDS). The motion was approved at the end, but the European Parliament should take into account the strong opposition of public opinion if it really wants to be worthy of representing European people, and take adequate measure towards TTIP. The recommendations contained in the cited resolutions set some limitations for the negotiators for next round that will take place from the 19th to the 23rd of October in the USA.

Even if Commissioner Malmström recently denied her statement in a letter to The Independent, she might not to be overly interested in taking into account the many concerns of European public opinions and political forces, if she aims at closing the agreement before 2017, end of Obama’s mandate.