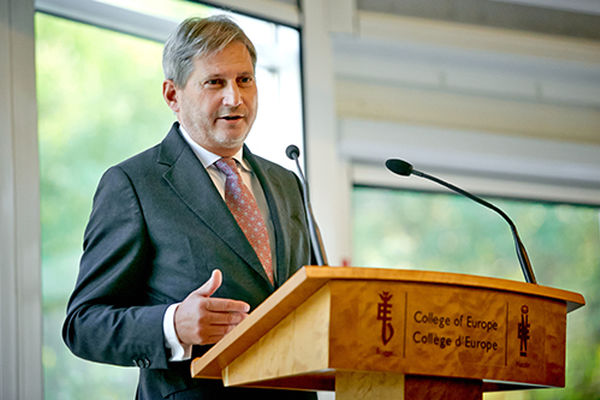 Johannes Hahn, Commissioner for European Neighbourhood Policy and Enlargement Negotiations, held the keynote speech during the Opening Ceremony of the academic year 2015-2016 of the Natolin campus of the College of Europe. In his opening address, he revealed the three main pillars of the revised ENP and spoke about the challenges of the European Union in its neighbourhood. “The EU is not the only force at work there.”

In the past decennium the European Union has been focussing on enlargement. After the accession of ten member states in 2004 the spirit in Europe was high. The expansion of the European Union was celebrated as one of the biggest success stories so far. Some politicians even spoke of the “reunification of Europe.” In that context the first European Neighbourhood Policy (ENP) came into being.

“The idea was that Europe would lead by example and through our insistence on political conditions and values, improved economic integration, financial support and legal approximation, and our partners would gradually emulate us. To put it bluntly: They would gradually become more European. Or so we thought”, said Commissioner Johannes Hahn.

After some initial achievements the European Union is now being confronted with several conflicts in its Neighbourhood. The Arabic Spring didn’t led to more democratic governments in the Middle East. In contrary, civil wars in Syria and Libya are among other things the root causes of the current refugee crisis, Furthermore, due to a more aggressive Russian foreign policy Ukraine lost Crimea to Russia. That brought not only chaos in East Ukraine, but also raises annexation fears in former Soviet states. Finally, the security situation in the Western Balkans remains far from ideal.

Hahn is aware of the difficulties his ENP is facing. “We have achieved a lot. We have brought some neighbours closer. But in the light of structural problems and turmoil in many parts of the neighbourhood, we have to take a hard look at the policy and ask self-critically: is it working? Is it delivering? How can we do better? Because we have to do better, in our own interest! Those who believed we would easily create a ring of friends now find themselves surrounded by a ring of fire.”

A revision of the European Neighbourhood Policy was needed. Nearly a year ago the team of Commissioner Hahn has started consulting on the future of the policy. The main pillars of the new ENP are: greater differentiation with individual partners, a sharper focus on areas of interest to European citizens, and a focus on stabilization, more flexibility in how the EU operates, and more ownership of Europe’s neighbours.

“First, we have to differentiate: the one-size-fits-all approach of the past is not suitable anymore. The EU will have different styles of partnership with different neighbours. Those who want to seek deeper integration will continue to do so. Some of them have clearly expressed, like Ukraine, Georgia or Moldova that they would like to become members of the European Union. Others, who are not so explicitly interested in a membership, but in other forms of relationships have to be supported and we have to find ways of agreements to express this relationship”, said Hahn.

“People want to join us and not others”

Hahn acknowledges that the EU is not the only force at work in its own neighbourhood and therefore should further develop its status as soft power. “There is nothing more attractive than that soft power. People want to join us and not others. I believe that we have to be clear that we are not trying to extend our territories. Quite the opposite: We are interested in a peaceful cooperation, where everybody can pursue his or her interests, where the rule of law is guaranteed and where there is an independent judiciary and freedom of media. If that is the case, I think we can prove to everybody that we are following a peaceful concept where there is space for everybody. If we, for example, are able to create better living conditions in Ukraine, that will be the most convincing approach.”

It is Hahn’s conviction that the European Union cannot simply buy reform. “You cannot turn on the light of modernization with the flick of a switch. You cannot install the rule of law by adopting the EU acquis on paper. We can only support reformers where they themselves choose that path. We need to act in the Neighbourhood in real partnership, with more buy in from the partners themselves.” That’s why Hahn wants to assist civil society in the ENP countries and invest in future generations. By prioritising youth employment and employability, the Commissioner wants to tackle many of Europe’s challenges including migration and radicalisation.