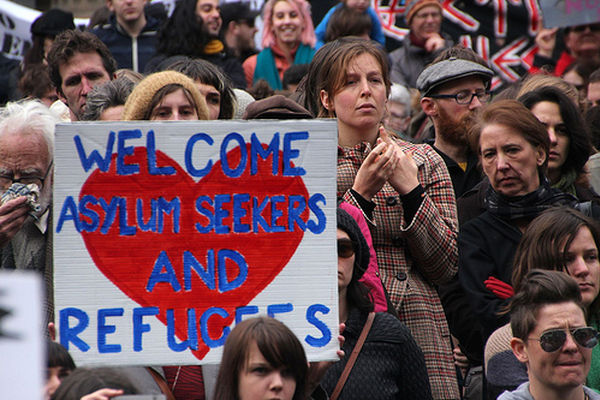 ‘I heard it from a German official after one of the enlargements’, affirmed Mr. Bernd Hüttemann of European Movement International to the students of College of Europe’s Natolin Campus. The meeting held on 17 September quickly became dominated by the crisis in the Mediterranean.

‘It was supposed to mean that all the work had been completed’, added Mr. Hüttemann while sitting next to Germany’s Minister of State for Europe, Mr. Michael Roth.

They seemed to agree that any notion of completion regarding the European project is far-fetched. The number and magnitude of failures in dealing with migrants and refugees have both shown the Union’s frustrating aspect: its unity. Or lack thereof. On this note, Mr. Roth made a strong call for action and solidarity to his audience in Natolin and to other member states.

Back in 1998, a delegation of Natolin students themselves publicly appealed to the Hague Congress invoking values that transcended frontiers. They criticized policies similar to those currently aimed at drawing the US towards Europe while much closer and suffering neighbors are kept distant.

17 years have passed, but the call remains applicable in the current context. This time the students listened while Mr. Roth gave a largely euro-enthusiastic speech. However, in terms of migration it offered nothing but a ‘blood, sweat, and tears’ sort of vision with several mentions of ‘dead’ Dublin asylum management system.

It urged the member states to embark on a (lengthy and painful) process to work out a new and working arrangement, and to do it fast. Let us be aware that the Dublin system’s death is slowly but steadily poisoning the Schengen area, which may face a major breakdown on its own. This could open a wound hard to stitch for months, years – or longer.

To counter this menace, on 22 September the Extraordinary Justice and Home Affairs Council of the European Union made the decision to relocate 120,000 refugees from Italy, Greece, Hungary and remaining Member States; those that have been dealing with an incessant wave of emergency migration over the past several months. It is to enable the Union to relocate a total of 160,000 people within the next two years.

Also, these debates concern tens of thousands, whereas the river of human beings flows at a pace of hundreds of thousands. Strengthened border surveillance and rescue costs are not even part of this equation. ‘It is not a Hungarian or an Italian crisis. It is an EU crisis,’ as Mr. Roth would eagerly put it.

The Commission signaled that the relocation is but a component of a comprehensive plan. In its report published on 15 October it stresses the successful implementation of a migration management ‘hotspot’ set up on Lampedusa (Italy) and another one soon to be launched on Lesbos (Greece), as well as an overall quick execution of agreements made in September.

A reform – or should we say, a resurrection – of the Dublin system is still considered by the European Council. The aforementioned report elaborates on close cooperation efforts towards key non-EU actors such as Pakistan and Turkey. This one will be tricky, especially given the latter’s turbulent political image stirred by Ankara bombings.

Lately it has been recalled that sealed (yet bursting) borders often foreshadow historic events. Unfortunately, more often than not those of the dramatic sort: only to mention the Soviet blockade of Berlin in 1948.

The Mexican-American or Israeli-Palestinian walled borders also give a grim impression. One could argue they are symptoms of weakness; an admission that ‘we have run out of ideas’.

The meaning of EU being ‘done’ can be twofold; it can stand either for a catastrophe or a miracle.

Where do the College of Europe students stand? Should they now take the floor next to Mr. Roth? Should they appeal – yet again – to key stakeholders and decision makers? The united Europe, the reason and object of their study, is shaking among disagreements and appalling rows regarding a variety of threats that migrating peoples allegedly pose to the rich western world. The students of College keeping their voice down – this is hard to imagine indeed.